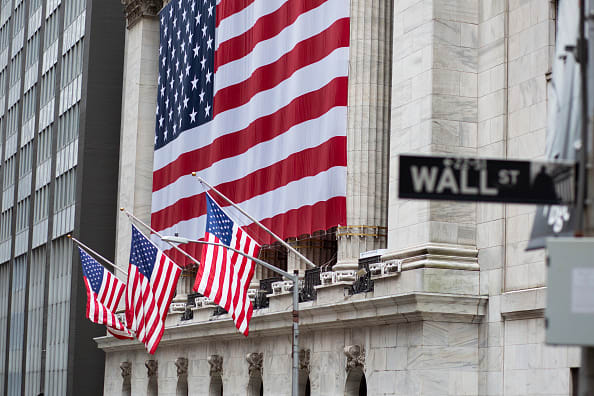 Bank of America said it earned 40 cents per share in the first quarter on revenue, net of interest expense, of $22.8 billion. Earnings were below expectations of 46 cents, while revenue basically matched forecasts. Like its rivals, BofA added $3.6 billion to loan loss reserves in the quarter. Market revenue broke down as $2.7 billion from fixed income trading and $1.7 billion from stock trading.

A delta crew wearing masks wait for a ride outside the Washington National Airport (DCA) on April 11, 2020 in Arlington, Virginia.

Delta, American, JetBlue and Southwest said they reached deals for portions of $25 billion in payroll grants to help them get through the coronavirus-driven economic downturn. The largest ever government airline aid package requires the carriers not to furlough or cut the pay rates of employees through Sept. 30. The grants were part of the more than $2 trillion outbreak relief package, which was passed by Congress and signed into law by President Donald Trump last month. The virus and harsh measures to stop it from spreading, such as state stay-at-home orders, have driven air travel demand to the lowest levels in decades.

4. Trump: Some states to open economies before May

President Donald Trump speaks during a news conference in the Rose Garden of the White House in Washington D.C., U.S. on Tuesday, April 14, 2020.

Trump said he believes some states will be able to “reopen” their economies before the end of April. U.S. coronavirus cases, while slowing, topped 600,000 with 26,059 deaths. Global cases neared 2 million with 127,590 deaths. At Tuesday evening’s coronavirus briefing, the president also said the U.S. will suspend funding to the World Health Organization, blaming it for “severely mismanaging and covering up” the spread of the outbreak. Paper checks of coronavirus relief payments to Americans will have Trump’s name printed on them, a Treasury Department official has confirmed to NBC News.

Shares of Tesla — over 20% off February’s record highs of $968.99 each — were getting a boost in Wednesday’s premarket, after Goldman Sachs returned to its coverage of the stock with a buy rating. Goldman put an $864 per share 12-month price target on the Elon Musk-led electric auto maker, implying an advance of over 20% from Tuesday’s closing price of $709.89 per share. Goldman expects electric vehicle penetration to increase to nearly 15% by 2030. The Wall Street firm also said that compared to other auto and tech companies, Tesla is attractively valued given its revenue growth.

A Message of Hope and a Grim Milestone

Enimil Ashon writes: What if no President by January 7 ?

Enimil Ashon writes: What if no President by January 7 ?