Afenyo Markin “begs” Minority for them to build Consensus 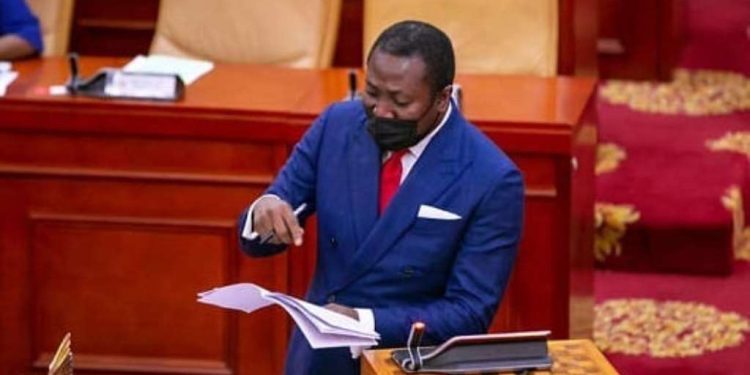 84
SHARES
467
VIEWS
Share on FacebookShare on TwitterShare on WhatsApp

Deputy Majority Leader, Alexander Afenyo-Markin, is appealing to his fellow leaders in Parliament to trust each other to build consensus and stop all forms of acrimony in the House.

Afenyo-Markin says acts of mistrust and unfounded allegations against each other must end to ensure smooth operations in the House.

Speaking in Parliament to end the first meeting of the second session of the 8th Parliament, Afenyo-Markin said Parliament remains the only beacon of hope for democracy in the country, and there is a need for the leadership as well as members to work together in the interest of the country.

“May I call on colleagues in leadership to purge themselves of mistrust for each other. Trust and confidence are bedrocks of consensus building. Making unfounded allegations against colleague MPs does not auger well for consensus building. Let me encourage all of us to engage in serious introspection and reconciliation with ourselves,” he said.

The first meeting of the second session of the 8thParliament has seen a number of chaotic incidents, including legislators getting physical in the chamber during the consideration of the E-levy bill.

The Speaker of Parliament, Alban Bagbin, in January also called for consensus building, compromise, and broader consultation among the leaders of Parliament to break away from the rancour that characterized proceedings in the first session of the 8th Parliament.

Speaking at a Commonwealth Parliamentary Association Workshop in Accra, the Speaker absolved himself of any blame in relation to the recent chaos in Parliament.

“I am the Speaker, and I do not take part in decisions, but it is my duty to enforce the rules… The only way is to get the two sides to dialogue, cooperate with each other and achieve consensus. This is an imperative imposed on us by the people of Ghana. We have no choice,” the Speaker said.

He has however admitted that managing this current parliament is a difficult task due to its unique nature.