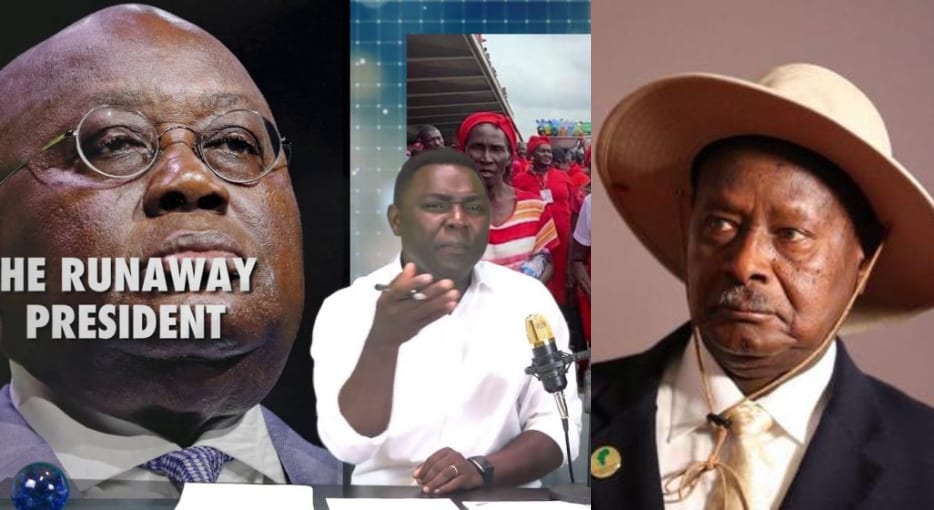 Controversial investigative journalist Kevin Taylor has thrown yet another punch at the President of Ghana, Nana Akufo-Addo stating his bad “dictatorial” leadership is on the same level as the leader of Uganda Yoweri Museveni, as such they are “Classmates” in bad leadership.

President Museveni who took power in the year 1986 by a coup d’etat has since remained president of the East African country for over 35 years and counting.

Speaking on “with all due respect” and giving a commentary of the ugly happenings in Uganda even after their heavily flawed election, Kevin said perhaps the only difference between President Akufo-Addo and his colleague septuagenarian Museveni of Uganda is that Akufo-Addo has not been in power for that long as compared to Yoweri Museveni.

However, his intimidation of opponents which includes shutting down opposition media houses, abuse of incumbency by blowing huge sum of money on frivolous travels, countless cases of corruption, nepotism and also almost criminalizing free speech with journalists and social commentators coming under constant attack for exposing the rots in his Government among others are all traits of what Yoweri Museveni is known for in Uganda; Mr Kevin Taylor said.

It was a highly anticipated election as many were looking forward to seeing if Bobi Wine could break the jinx to bring an end to the reign of Yoweri Museveni after over three decades.

That did not happen as the election was called for Museveni giving him a 58.65% with Bobi Wine Pulling 34.83%.
Bobi Wine has since rejected the result of the election claiming the election was rigged and the will of the people subverted by President Museveni.

Just as the National Democratic Congress is accusing the government of President Akufo-Addo for using the military and police service to unleash terror on voters during Ghana’s 2020 election, harassment and intimidation of opponent and civilians which led to the death of 8 Ghanaians during the 2020 elections, Bobi Wine has also accused the President of Uganda Yoweri Museveni for coming after his life and that of his family using the military.

Bobi Wine was arrested and detained on so many occasions even before the election with heavily armed soldiers holding him and his family hostage immediately results were announced under bizarre conditions.
Some of his party supporters just as it happened in Ghana were murdered by security forces even when they were not armed.

Kevin Taylor again added that Africa’s problem is just one thing which is Greed and unflinching love for power by old men.

Mr. Taylor said Africa is a beautiful continent with enormous opportunities but because of greed and bad leadership from old dictators like Museveni who are doing everything to hold onto power, a promising continent is left underdeveloped.

He went further to give a list of some African leaders who have remained in power against the will of their people for decades even as they become incapacitated in executing their mandate.

Kevin Taylor said President Akufo Addo is a creation of a biased media and some civil society organizations and so called opinion leaders who are nothing but tribal bigots.

He is not what they said he is and time has really exposed how bad he is with leadership.