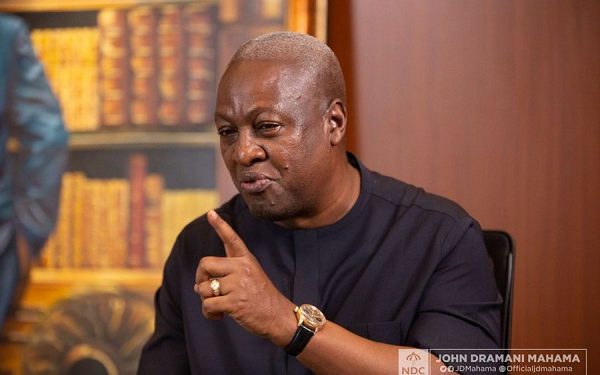 39
SHARES
214
VIEWS
Share on FacebookShare on TwitterShare on WhatsApp

Former President John Dramani Mahama has said the Akufo-Addo administration has collatralized all the revenue sources in the country and spent the cash upfront.

This, he said, is affecting the government currently because they no longer have money to spend.

For instance, Mr Mahama explained, the government has collateralized the Energy Sector Levy Act (ESLA) until 2035.

This means that from now till 2035, governments are not allowed to have access to cash from ESLA, he added.

The Ghana Education Trust Fund (GETFund), he said, has also been collateralized.

Addressing a gathering on the economy in Accra, Thursday June 30, the 2020 presidential candidate of the National Democratic Congress (NDC) said that recently when the Trade Union Congress (TUC) made a demand that government should remove some taxes on petroleum products, he indicated that the government could not do what they were asking for because the taxes have been securitized.

“There is the collateralization of all sources of revenues and it is affecting them because these revenues are no longer available, they have taken them upfront and spent them.

“But the more important thing is the effect it will have on our future and future governments. For instance, ESLA, till 2035, it means that governments now, and 2035 are not going to have access to any extra ESLA revenues.

“GETFUnd, they have used it to float a bond and so they themselves and future governments will not have access to GETFUnd revenues.

“That is why I said the other time when the TUC asked that the President should take some of the taxes off, I said some of the taxes, they can’t take them off because they have collected the money and spent it upfront.”