Akufo Addo is the one behind the reckless Comment of Lord Comment that he won’t Hand over Power, I could have also decided to hand over to NDC candidate in 2016 but..- John Mahama 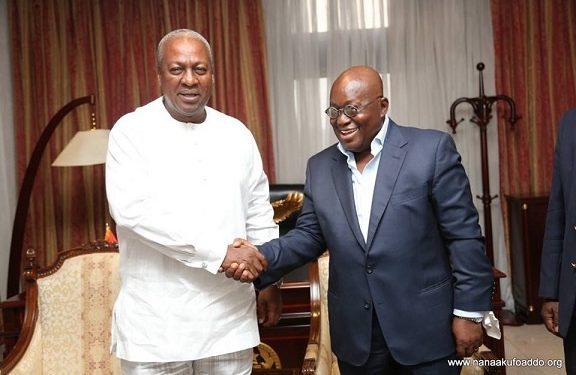 101
SHARES
561
VIEWS
Share on FacebookShare on TwitterShare on WhatsApp

Former President John Mahama has reacted to a comment passed by Lord Commey who works as Director of Operations at the Presidency.

In a comment made during a delegate conference in the Greater Accra Region Mr Commey who served as the National Organizer of the NPP said he does not care who becomes Chairman or Flag bearer of the NPP, all he cared about was for NPP to remain in power against all odds.

He maintained that so long as he lives, the NPP will never hand power to the NDC because he hen God gives you power you must utilize it hence the need for NPP to stay on power Perpertual.

His comment has attracted multiple reaction from people within the NDC who feels 2020 was a year they should have won but the NPP used the military to rig the election.

They used their vigilantes and the The Electoral Commission being led by Jean Mensa to rig ye election.

Speaking on his Tour of the Volta Region to thank the for their support in 2020 elections, Former President Mahama said Lord Commey have no power to determine who his government hands over power to as the constitution is clear that if you lose an election you leave for the winner to take over.

He however cautioned Lord Commey that the will of the power and the constitution is supreme.

“I could have also decided to hand over power to the NDC in 2016 but I respected the will of the people. When you hear them it’s all about power and not the welfare of the people.

His comments represent that of Nana a Akufo Addo as he takes inspiration from them, you all witnessed what happened at Ayawaso and how that led to the killing of 8 Ghanaians in 2020 elections, that’s the impunity we talking about” John Mahama said

John Mahama and the NDC will be facing the NPP on 2024 elections and even though Akufo Addo will not be eligible to Contest, he has spoken through Lord Commey that he is only going to hand power to an NPP President.