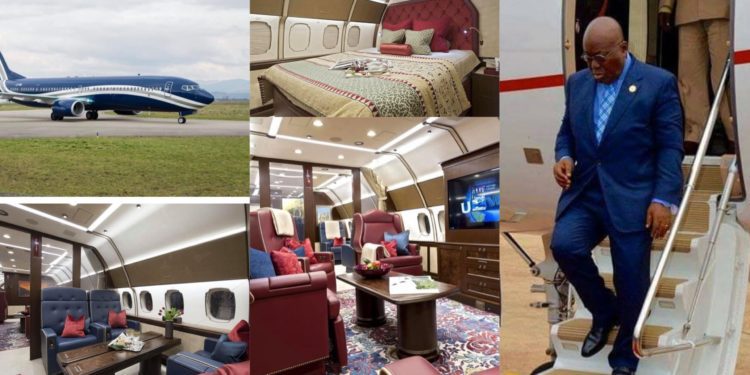 188
SHARES
1k
VIEWS
Share on FacebookShare on TwitterShare on WhatsApp

President Akufo Addo has left the shore of Ghana and will be away for the next ten days.

He left Ghana, on Thursday, 10th February 2022, to begin a ten-day working visit to France, Guyana, Belgium, Germany and the United Kingdom.

President Akufo-Addo’s first port of call will be Brest, France, where, at the invitation of H.E. Emmanuel Macron, President of the French Republic, he will participate in the One Ocean Summit, to be held on Friday, 11th February, 2022. Up to 40 world leaders are due to make “ambitious and concrete commitments” towards combating illegal fishing, decarbonising shipping and reducing plastic pollution at what is billed as the first high-level summit dedicated to the ocean.

Thereafter, the President will, at the invitation of H.E. Dr. Mohamed Irfan Ali, President of the Cooperative Republic of Guyana, travel to Georgetown, Guyana, participate as a keynote speaker at the maiden International Energy Conference and Expo by Guyana to be held from 15th to 18th February, 2022. Ghana and Guyana are developing close working relations in the oil and gas sector.

Following the visit to Guyana, he will travel to Marburg, Germany, at the invitation of KENUP Foundation, to participate, together with Presidents Macky Sall and Paul Kagame of the Republics of Senegal and Rwanda respectively, at the presentation of the BioNtech modular production facility for MRNA vaccines on Wednesday, 16th February, 2022, towards a pan-African Project for the establishment of a vaccine manufacturing plant in Africa.

President Akufo-Addo will then travel to Paris, France, to meet with President Emmanuel Macron, together with other African Heads of State, on the security situation in the Sahel and Africa, in general, in the evening of 16th February, 2022. He will also participate in a meeting with President Emmanuel Macron and some Heads of State from the ECOWAS Region in the morning of 17th February 2022, to discuss the security situation in ECOWAS.

After this meeting, he will travel to Brussels, Belgium, to participate in the Africa Union-European Union (AU-EU) Summit to be held from 17th to 18th February, 2022, and then travel to the United Kingdom for a private visit.

President Akufo-Addo will return to Ghana on Sunday, 20th February, and, in his absence, the Vice President, Alhaji Dr. Mahamudu Bawumia, shall, in accordance with Article 60(8) of the Constitution, act in his stead.

Travelling on Same Most Talked About Private Jet

The President of Ghana who in this critical times is asking Ghanaians to make sacrifices to pay an E-Levy traveled with the very same Private Jet they have refused to disclose full expenses to Ghanaians.

From our Checks, the Luxemburg based Jet touched down in Ghana on Wednesday and left with Akufo Addo the following day.

The story was broke last year October by MP for North Tongu Samuel Okudzeto Ablakwa where he stated his independent checks suggest each hour on that Jet cost a whopping 15 thousand British pounds an hour.

The foreign affairs ministry, National security and Defense have all refused to answer questions on the actual cost of the President travelling expenses.

In a Yet a new Facebook post made today 11th February 2022, Honourable Ablakwa has thrown further light on the the insensitivity of Akufo Addo by still having thirst for luxury even when he is supervising a collapsed economy.

Below is what his post on social media days.

Yesterday, February 10, 2022 — Nana Addo Dankwa Akufo-Addo demonstrated beyond any shred of doubt that his blatant contempt, gross insensitivity and utter disdain for the Ghanaian people who made him President have no boundaries, whatsoever.

On the very same day and literally during the “Yentua March” by thousands of Ghanaians from all walks of life who took to the streets of Accra to register their revulsion in the strongest of terms against the obnoxious E-Levy and government’s profligate dissipation of current taxes, loans and other resources which have led to a downgraded economy now in the ICU; President Akufo-Addo, in the most heartless, scornful and outrightly insulting conduct yet, opted for the umpteenth time to abandon Ghana’s Presidential Jet and fly out of the country aboard his chartered US14,000 an hour ultra-luxury executive jet — the Boeing 737-97Y(ER)(BBJ3), registered LX-DIO.

In a grotesque imagery of a President who couldn’t be bothered or give a toss about the mass agitations of his employers — President Akufo-Addo took off from the Kotoka International Airport at exactly 13:00 GMT — obviously at the same time angry protesters were approaching Parliament to present their petition.

The President’s reckless indiscretion is likely to make it to the Guinness Book of Records as the most provocative, thoughtless and hard-hearted misconduct by any democratically elected leader.

One wonders if the President still felt no remorse when he saw from mid-air, the protestors, some of them older than him and others struggling mothers worried about grim prospects for their children.

From our unimpeachable tracking, President Akufo-Addo touched down last night in France at 20:50 CET.

Our comprehensive computation of the President’s flying time for his 10-day tour looks as follows: 6 hours and 50min from Accra to France; 8hours and 30min from France to Guyana; 9hours and 5min from Guyana to Germany; 1hour and 10min from Germany to France; approximately 1hour from France to Belgium; another 1hour from Belgium to UK; 6hours and 30min from UK back to Ghana. This works out to some 34hours of air travel — at US14,000 an hour, an initial bill of US$476,000 arises.

In sum, for abandoning Ghana’s Presidential Jet and obstinately choosing an extravagant and sybaritic option, the Ghanaian taxpayer should expect to cough up a staggering US$776,000 or the Cedi equivalent of GHS4,979,328.16 by the time President Akufo-Addo returns.

Ironically, the cost is much higher than the GHS4.6million government has been unable to release to the Students Loan Trust since last year, making it impossible for the SLT to cater for the needs of thousands of tertiary students for more than a year, as it emerged in Parliament this week when I demanded answers from the Education Minister.

What should further embarrass all well-meaning Ghanaians is the fact that our real-time tracking reveals that none of the African Presidents joining President Akufo-Addo for these meetings are engaged in such unconscionable hedonistic misconduct. They are all making good use of their national presidential jets.

For a President running away from accountability as his Ministers unjustifiably and unconstitutionally hide behind the cloak of national security not to disclose the full cost of his lavish skybath travels to us in Parliament, one would have expected that the President will reconsider his ways, particularly considering the now collapsed economy and how the Ghanaian populace have flatly refused to accept the E-Levy largely because of the President’s penchant for obscene opulence and impunity of not accounting to the people who fund his aristocratic tastes.

What a terrible own-goal at a time President Akufo-Addo is contemptuously defying practically everyone and moving mountains to force the passage of the dreaded E-Levy.