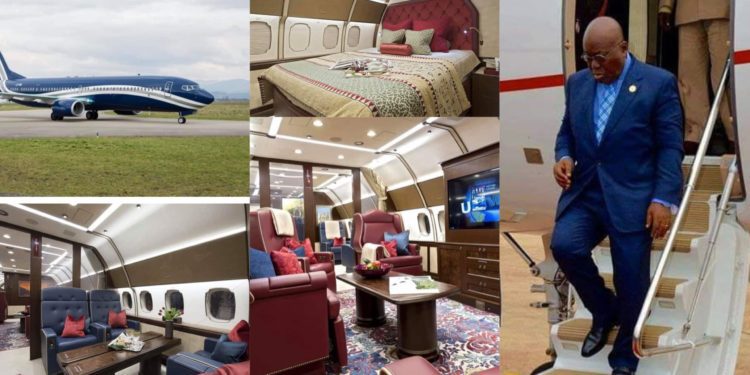 669
SHARES
3.7k
VIEWS
Share on FacebookShare on TwitterShare on WhatsApp

Akufo Addo has gone back to renting and travelling around luxury private jet after E-Levy was passed.

The President of Ghana has been travelling with a luxury jet abandoning Ghana’s Presidential jet for some time now.

Hypocritically, when the issue became a talking point, he resorted to travelling with Emirate jet to Dubai Expo.

The MP for North Tongu Samuel Okudzeto Ablakwa who brought the news to the public on Akufo Addo’s thirst for luxury at the expense of the taxpayer has broken the news yet again that Akufo Addo went back to blow million of cedis on private jet travels.

The President is currently in America to attend a private program organised by Pastor TD Jakes. He will fly from America to London partying in the Air.

Ghana has been broke because of his mismanagement, but of course with the passage of E-Levy, he knows there will be enough money to waste like never before.

Below is the post Hon. Ablakwa made giving details of Akufo Addo’s luxury jet.

I know many of you have been waiting keenly for our consistently unimpeachable and authoritative flight tracking details of President Akufo-Addo’s latest travel to the United States of America and the United Kingdom.

As always, we appreciate your high interest, generous encouragement and most importantly your patriotic partnership in ensuring that there is greater transparency and accountability in the governance of our dear and only country.

Unfortunately, I do not have good news for you. Our crusade to get the President to keep his promise of protecting the public purse and our resolve to end naked profligacy still requires more work.

With the pretentious notion that the obnoxious E-Levy has been secured to rake in more revenue to finance his lavish indulgences, and after hurriedly granting a presidential assent of dubious validity, as President Akufo-Addo knows very well that 136 NPP MPs cannot purport to constitute a decision-making quorum; President Akufo-Addo is back to his old ways of Russian Oligarchic travels.

After a momentary glimmer of hope when he was compelled to fly commercial to Dubai last month, many had thought his penchant for egregious betrayal of the Ghanaian people by his obstinate dissipation of scarce taxes on his sybaritic lifestyle despite a hitherto loud promise to protect the public purse now belongs to the past. More so, considering his government’s public posture of massive expenditure cuts as a direct response to the current economic crisis.

Apparently, we were merely deceived; President Akufo-Addo has for the umpteenth time ignored the precarious state of the Ghanaian economy and abandoned Ghana’s US$36million Presidential Jet in favour of his most cherished ultra-luxury toy — the LX-DIO which now rents for US18,000 an hour.

It is clearly a helpless costly addiction which sadly, the Ghanaian taxpayer must pay for.

The President’s latest misconduct appears to be the most deceptive thus far.

His new “meet-me-there-strategy” is a well hatched one to create the impression to Ghanaians back home that he’s indeed repented and now committed to flying commercial only to catch up with his chartered aircraft in transit for the rest of his travels.

So, President Akufo-Addo left Accra for Washington on Thursday 31st March, 2022 at 11:52pm aboard a United Airlines Boeing 787-8 Dreamliner with call sign UAL997.

Before the President landed at 6:40am at the Dulles International Airport in Washington on the 1st of April, the ubiquitous luxury LX-DIO had landed at same airport the previous day at 12:27pm waiting for President Akufo-Addo.

President Akufo-Addo couldn’t wait to fly his favourite US$18,000 an hour LX-DIO from Washington where he departed at 10:13am and arrived at the Charlotte Douglas International Airport in North Carolina at 11:22am — a flight time of 01:09. It is important to acknowledge that there were more than a dozen available commercial flights with business class tickets not exceeding $700 in value.

The President kept the LX-DIO with him as he addressed Bishop T.D. Jakes’ summit and then flew aboard the same extravagant jet yesterday the 2nd of April, 2022 at 9:28am US time and arriving at the London Stansted Airport at 9:40pm UK time. A flight time of some 7hours 54minutes.

At this point, it is unclear if the President will return to Ghana with the LX-DIO on Wednesday or if he would stick to the new deceptive strategy of being seen in the Ghanaian jurisdiction aboard commercial flights while hiding his elaborate chartered arrangements from the prying Ghanaian public.

It is imperative to note that so far, the Ghanaian taxpayer must cough up an astronomical US$465,000 in luxury rental charges. At current exchange, that is a scary GHS3,505,515.49.

This will mean that since May last year, the Ghanaian taxpayer has spent at least GHS28.5million on President Akufo-Addo’s ostentatious travels.

How duplicitous is that for a government that claims to be cutting expenditure drastically in the wake of widespread excruciating hardships and economic mismanagement, and yet our President has the conscience to spend a whopping 3.5million Ghana Cedis attending a church service and a fanciful tourism event in London.

With this terrible example from the President by attending events at great cost to the taxpayer that cannot be classified as priority, one wonders how the presidency can enforce its recent ban on ministerial international travels.

Be assured, this latest “meet-me-there-strategy” shall be vigorously exposed and defeated.

Our tracking continues; we shall keep you updated.

For God and Country 🇬🇭 🙏🏽