Akufo Addo’s Government blown 948.5K cedis on rented Luxury Jet for Adwoa Safo to Fly from America to Ghana to vote on E-Levy 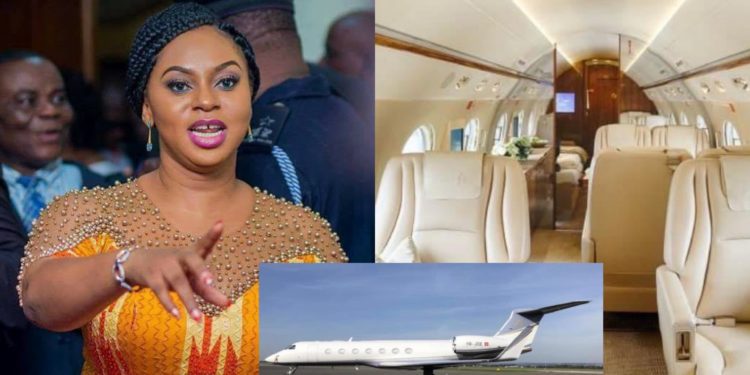 140
SHARES
778
VIEWS
Share on FacebookShare on TwitterShare on WhatsApp

As the issue of Sarah Adwoa Safo the MP for Dome Kwabenya avoiding parliament lingers on, MP for North Tongu Samuel Okudzeto Ablakwa has revealed how much it cost to chauffeur Adwoa Safo in a private jet from America where she is relaxing to Ghana just to vote on the unpopular e-levy which wasn’t even successful.

A few days ago, Kennedy Agyapong revealed The chief of Staff;Frema Opare gave him 120,000 cedis to deposit into the fidelity bank account of Adwoa Safo all in attempt to convince her to leave America to Ghana to vote on the E-Levy because the NPP in parliament didn’t have the numbers to push it through.

Among his revelations, The lousy Assin Central MP said Adwoa Safo is holding the Akufo Addo government to a ransom because she has asked to be made a deputy leader of Parliament and all attempts to have her be in parliament to push government agenda has proved futile.

Till date Adwoa Safo is yet to report to Parliament with the NPP making moves to remove her from the house on grounds that she is sabotaging the government especially on the front on pushing for the draconian e-levy to be accepted.

Honourable Ablakwa this morning through his Facebook page revealed that indeed the 120k cedis Kennedy Agyapong stated she was asked to give Adwoa Safo cannot be the only money the Akufo Addo led government has spent on Adwoa Safo so far. Because details of the very HB-JOE Luxury private jet she came in to Ghana with charges around 4,800 dollars every hour.

When that amount is multipled by 11 hours which is the flight hour from America to Ghana, the total cost of just moving Adwoa Safo to Ghana cost the tax payer a whopping 140,000 dollars which is 948500 cedis on a private Jet.

This is coming at a time Akufo Addo is asking Ghanaians to pay an e-levy to cushion their luxury lifestyle.

Below is the full Post of Sammy Okudzeto Ablakwa giving details of how much Government is blowing away on luxury jets.

It is surprising that the focus of many including Civil Society Organisations in the series of Adwoa Asafo revelations has been on the alleged GHS120,000.00 transfer into her bank account from the Chief of Staff.

The cost of the private jet used to ferry her from the USA to Ghana which is much higher than the GHS120,000.00 cannot be ignored.

We now know that a Gulfstream G-550 registered HB-JOE and operated by Premium Jet AG based in Belgium was the executive aircraft chartered to bring in Hon. Adwoa Safo for her vote on the obnoxious E-Levy.

With an 11-hour flight distance, payment of reposition fees (as it flew from Belgium to pick her up in the States), payment of one-way fees (as the business jet flies back home empty), crew per diem fees, landing and wait-time fees; it cost a staggering US$140,000.00. At today’s exchange rate, that is GHS948,500.00

It is most intriguing that an economy which is said to be broke can lavish a fantastic GHS948,500.00 plus GHS120,000.00 (a total of GHS1,068,500.00) just for one E-Levy vote. Imagine what our country can do with 1million Cedis in the midst of our economic challenges, NABCO demonstrations and labour agitations?

How ironic, that the political tradition that in time past roundly rejected the reported kindness of President Rawlings’ friends will today be boldly canvassing a bizarre kind of friendship support.

The Office of Special Prosecutor must look into the entire GHS1,068,500.00 (ONE MILLION, SIXTY-EIGHT THOUSAND AND FIVE HUNDRED GHANA CEDIS) expenditure for Adwoa Safo’s E-Vote and not only the GHS120,000.00 deposited in her account.

The current composition of Ghana’s 8th Parliament should lead us to a patriotic, mature and frugal path of consensus building in the national interest; and not the present embarrassing spectre of opting for an extremely partisan, destructive, wasteful, small-minded and reckless road to perdition.