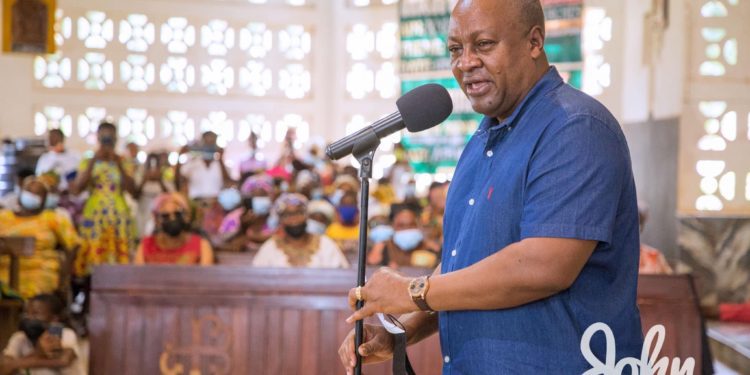 8
SHARES
43
VIEWS
Share on FacebookShare on TwitterShare on WhatsApp

Former President John Dramani Mahama has blamed the Akufo-Addo-led government for the current economic hardships the country is faced with.

According to Mr. John Mahama, citizens are also aware of the role played by government in this alleged hardship.

“My counterparts are accusing me of peddling falsehoods with regards to our living standards but we are all living in this country. Clearly, the country is going in the wrong direction. It’s going downhill and the cost of goods are extremely high. I’m not the one saying it.”

He further mentioned that “a bag of maize now is more than GH₵400 but when we were in power, it never went beyond GH₵120 but today, go and ask the poultry farmers, they are all selling the birds because they can’t afford to buy maize”.

The cost of a bag of cement was GH₵27 when we were in power, but today it’s almost more than GH₵50 per bag. Do you think it’s Mahama who would go and tell people about the cost of living? But my opponents are accusing me of peddling falsehoods with the economy”.

The 2020 Presidential candidate of the National Democratic Congress (NDC) made the submission on Techiman-based radio station, Akina FM during his thank-you tour of the Bono East Region.

Mr. John Mahama again accused the incumbent government of obtaining power by deceiving the electorates in the 2020 general elections.

They said the money is there and we don’t need to borrow to build Ghana. Upon all these, they have borrowed almost GH₵300 billion in debt and instead of us seeing physical infrastructural projects, we have not seen anything within the last five years”.

During his tour, Mr John Mahama thanked the residents in the region for the support the party received in the 2020 general elections.