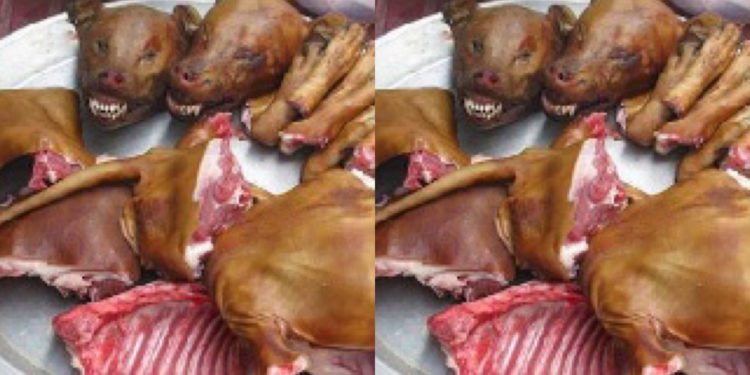 Dog and cat meats remains a favorite delicacy for many group of persons and even tribes in Ghana.

While some have expressed worry that consumption of Cat and Dog meats are gross, others says, the taste of these two animals are just too strong to resist.

Government petitioned to ban trade in dog and cat meat
Miss Natasha Choolun, an International Animal Rights Activist, has petitioned the Government of Ghana to ban the trade in cat and dog meat for human consumption.

“Dogs and cats are not food, but loyal companion animals that should be treated with kindness and respect, not brutalised and eaten,” she said in a petition.

The petition noted that the trade in dogs and cats was wide spread across African countries, making them unattractive to tourists who were aware of the “cruel” industries and unwilling to invest in those countries.

It said besides the fact that it was cruel to kill and eat those animals, they were also kept under unhygienic conditions, promoting the spread of fatal diseases.

The petition said, “The World Health Organisations has confirmed that these global live animal markets must be closed as they are at the root of COVID-19 and are also a breeding ground for the spread of other fatal diseases.

“The brutal dog and cat meat trade is putting human health at risk from consumption of dogs and cats in form of Cholera, Rabies and other deadly diseases and now COVID 19.

It said Government must also ban wildlife trade, dog racing and dog fighting and “implement enforceable laws to protect these animals from harm”.