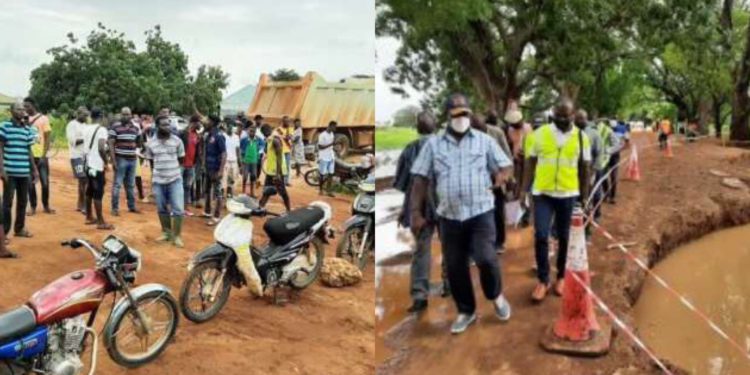 80
SHARES
444
VIEWS
Share on FacebookShare on TwitterShare on WhatsApp

A youth group calling itself Common Interest of Buluk in Sandema, the Builsa North Municipal capital of the Upper East Region on Thursday, blocked the Roads and Highways Minister’s convoy from entering the town.

The aggrieved youth took the action to register their displeasure about the attitude of the Contractor, MyTurn Construction Company Limited about the slow pace of work on the Chuchuliga-Sandema road project.

According to the youth who used their motorbikes to block the road, compelling the minister, Kwasi Amoako-Atta’s convoy to stop, the construction work was abandoned for several months only for them to see a grinder on the road a day to the Minister’s visit. 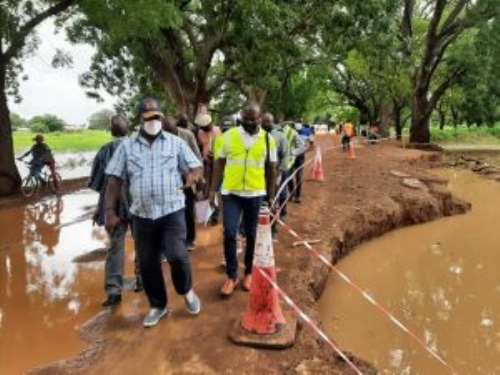 Chairman of the Common Interest of Buluk Hippolite Awennate Alhassan, who spoke to the media prior to the arrival of Mr Amoako-Atta and his entourage, said the people of Buluk were taken for granted for far too long.

He said “The road contract was awarded in 2016 and was supposed to be completed by 2019 February. After they cut sod for the construction, they halted the work.

“Anytime the President or any dignitary is visiting the Municipality, then you see the Contractor on site, when he leaves, then that ends it,” he said.

Mr Alhassan recalled that the last time the Contractor was on site was during the 2020 Parliamentary and Presidential campaign season, “Before the elections, MyTurn was on the road, because the Second Lady was visiting the Municipality.

“And after that, he varnished, we never saw him again until now that the Minister is visiting, he decided to come on site again. So we said no, we cannot be taken for granted all the time. We want the road to be left as it was for the Minister to know that no work is done,” the Chairman said.

According to him, the group had sent many petitions to the Office of the Regional Minister and intended to send another one, after blocking the road, and if no action was taken, they would take the next step which he declined to disclose to the GNA.

Mr Stephen Yakubu, the Upper East Regional Minister in the company of Mr Williams Aduum, the Kassena-Nankana Municipal Chief Executive, got off their vehicles when the realised the road was blocked to talk to the youth.

Mr Yakubu told the group that “We have come with the sector Minister to see the problems so that we will be able to resolve them for you. I am in the Region, why haven’t you come to tell me this, and because today Minister is coming here, you are blocking the road.

“You should have come to tell me that this is the problem you have, so that we address the issue. What you are doing is not good. If you have any problem, I am the Regional Minister, come and tell me. So let us go and do what we have come to do,” Mr Yakubu told the youth.

The intervention of the Regional Minister calmed the Chairman and members of the group down and they cleared the road for the convoy to pass.

Mr Amoako-Atta was in the Municipality to inspect the extent of damage caused by the recent floods on the main road leading into the Sandema Township which prevented commuters from travelling in and out of Sandema.