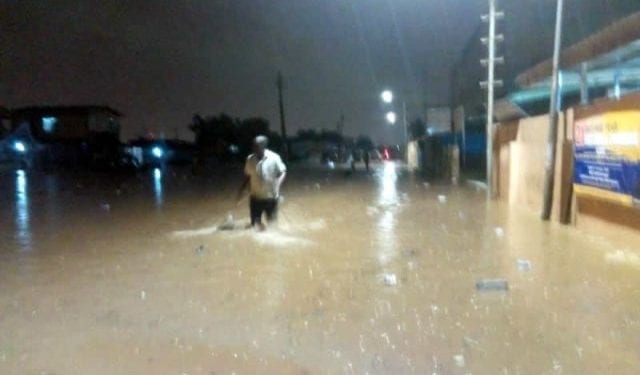 10
SHARES
56
VIEWS
Share on FacebookShare on TwitterShare on WhatsApp

A devastating news has rocked Kumasi the Ashanti Regional capital after a baby was washed away by floods during last night rains.

A baby has been reportedly washed away in Sawaba in Kumasi following the Wednesday evening rains in the Ashanti regional capital.

The baby was traveling with his parents in a tricycle when they got stuck in a flood causing the tricycle to tip over.

Residents in the community, according to reports, moved in to save the parents but could not find the baby as he was washed away by the flood.

Flooding remains one of Ghana’s biggest challenges especially in the urban areas.

On June 3, 2015, a GOIL fuel station near Kwame Nkrumah Interchange burnt with people and vehicles in the vicinity during a torrential rains which caused almost all of Accra to flood.

The fire also burnt a Forex Bureau and Pharmacy nearby. Over 200 people were feared dead at the time.

However Other reports with respect to last night incident also say the convoy of President Akufo-Addo which was returning from the Upper East region got stuck in the flood.