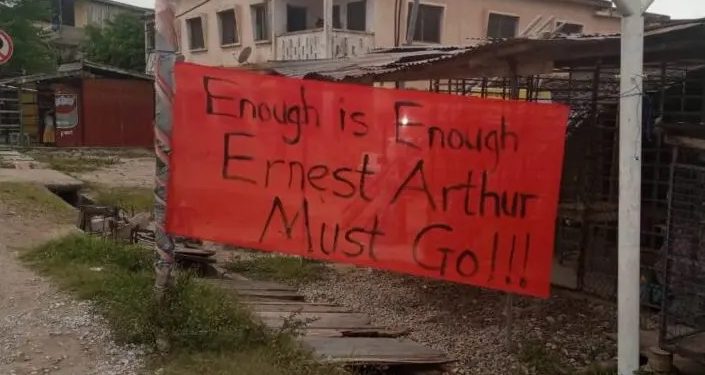 According to the MPs, Kweku George Ricketts-Hagan of Cape Coast South and Kwamena Mintah Nyarku of Cape Coast North, the NPP have devised several means to ensure that Ernest Arthur is forcefully confirmed.

The 2020 NPP Parliamentary Candidate for Cape Coast South has failed twice to get two-thirds majority votes of assembly members after being renominated by President Nana Addo Dankwa Akufo-Addo.

Mr Arthur, popularly known as Mayor 1, needed only four votes on Wednesday, October 6 in a second voting on his renomination to be confirmed Chief Executive.

But not even an impassioned gesture by the Central Region Minister, Marigold Assan, will move some assembly members to vote for him.

Others had accused NDC’s Ricketts-Hagan of masterminding his defeat.

Cape Coast South’s Ricketts-Hagan accused of giving some Assembly members $100 each to reject nominee
He had polled 34 ‘Yes’ votes in the first voting on Monday, September 27, a marked departure from the 99 percent he polled in 2017 when he was nominated for the first time by the president.

Addressing journalists on Monday, October 11, the day initially rumoured for the third and final voting, the two NDC MPs said the two-time rejection of Mr Arthur is a clear indication that he is not wanted by the good people of Cape Coast as mayor.

“There is no law in the constitution that the President should re-present or renominate the candidate. However, the President in his prerogative can renominate a failed nominee,” former Deputy Finance Minister Ricketts-Hagan admitted.

They claimed the NDC will resist all attempts by government to use institutions such as the police and NPP’s Invisible Forces to intimidate assembly members.

“We will make sure that nothing less than free and fair elections is what happens here in Cape Coast,” said Mr Mintah Nyarku.

They said any bloodshed in the ancient capital will be put on the head of the government.