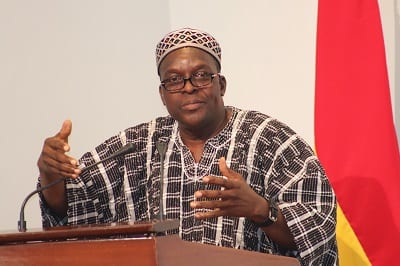 Right Honourable Speaker Alban Bagbin who was elected as speaker of the 8th Parliament of the 4th Republic has said Parliament under his watch will no longer be rubber-stamping government policies and programs.

In what appears to be his 3rd chairing of the event ever since he was sworn in on the 7th January 2020, the speaker said the closeness of the numbers of the house in itself will give no room for just any bill to be passed because it serves the interest of some group.

It will be recalled that the 7th Parliament by virtue of the NPP overwhelming majority passed the stinking Agyapa deal even when every right-thinking person said it was a bad deal that will only favour a particular family Ghana shouldn’t have prioritize.

In the midst of all the alarm raised by the then minority in parliament the deal was passed by NPP numbers but was eventually crushed because of how shady the whole process was.

The new Speaker expressed his disappointment about the 7th Parliament’s inability to pass some very important bills into law like the affirmative bill.

Just as he has stated he wouldn’t be an NDC speaker even though he has a long-standing affiliation to the NDC, the speaker in his speech also said Parliament will have to work together with us to make sure Ghanaians are the ultimate beneficiaries of their service to the country.

However, in what seems like a jab to the member of parliament for Suame Right Honourable Bagbin on a number of occasions in his speech stated emphatically that he was duly elected in the eyes of everyone present and those who watched from home and not selected by any consensus-building process as falsely claimed by Mr Osei Kyei Mensah Bonsu for the past days.

The speaker pledged to be fair to all manner of persons but will never lower the bar in doing business of the house.
He welcomed the new members of the house and admonished them that catching the eye of the speaker means putting up good behaviors and not repeat disgraceful conduct like that of Carlos Ahenkorah which made the news for him snatching a ballot during counting.

This he believes brought the integrity of Parliament into disrepute and should not be repeated ever again.
The speaker finally declared there will be no minority or majority as both the NPP and NDC have 137 seats each with 1 seat going to an independent candidate.

Don’t look for me else where; I live close to SC judge who gave you $450k before 2016 elections – Kevin Taylor to Akuffo Addo

Don't look for me else where; I live close to SC judge who gave you $450k before 2016 elections - Kevin Taylor to Akuffo Addo