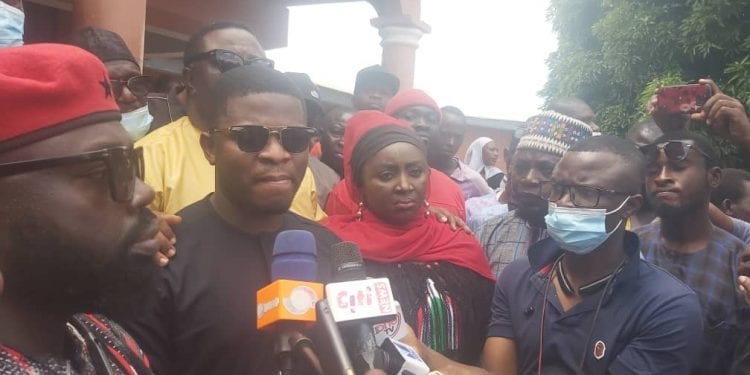 44
SHARES
246
VIEWS
Share on FacebookShare on TwitterShare on WhatsApp

The opposition National Democratic Congress (NDC) is calling for the immediate dismissal, arrest, and prosecution of the Municipal Chief Executive (MCE) for the Ejura/Sekyedumase Municipal Assembly, Sualisu Bamba, following the death of a social activist in the area, Ibrahim Mohammed.

According to the NDC, the MCE is complicit in the death of the social activist.

The party also wants the Police Commander for Ejura and another commander who unleashed military personnel on protesters to be interdicted and punished according to law.

The NDC described the killing and the brutality meted out the protesters in Ejura as barbaric and also called on more moral voices to speak against the incident.

The National Communications Officer of the NDC, Sammy Gyamfi, who is part of a delegation comprising the party’s National and Regional executives, were in Ejura to visit relatives of the deceased and the injured protesters today, Thursday, July 1, 2021.

Mr. Gyamfi also alleged that there are attempts by some persons in the police service to shield the perpetrators of the murder of the social activist, Ibrahim Mohammed.

“Until the perpetrators are arrested and dealt with according to law, I am not sure the soul of Ibrahim Mohammed [social activist] will have any peaceful rest. So we are saying that apart from dealing with the killers, the Municipal Chief Executive of the area, whose bodyguards committed that murder, and the same MCE who deployed the military to attack young peaceful protesters, should be dealt with. The military men who squatted, aimed, and shot at unarmed, harmless, retreating protesters should be dealt with according to law. The MCE cannot continue to be in office. So it is important that, with immediate effect, he is dismissed from office, arrested, and prosecuted.”

“Aside from that, the police commander for Ejura and the military commander who was responsible for the mindless deployment of the military that caused two other deaths must be interdicted immediately, prosecuted, and punished in accordance with the law.”

Ibrahim Muhammed, died on Monday, June 28, 2021, after he was attacked by a mob when he was returning home on his motorbike on Sunday at Ejura in the Sekyedumase District of the Ashanti Region.

He’s alleged to have been killed because of his social activism, which some felt was making the government unpopular.

The 45-year-old was noted to be vocal on both local and national issues using his Facebook page.

His family said he had faced threats over his activism prior to the attack.

Following his burial, some residents of Ejura began a street protest but were confronted by armed police and military personnel, leading to the deaths of two persons who were said to have been shot by some soldiers. The Police claim the protestors had become rowdy and were pelting s the security personnel with stones.