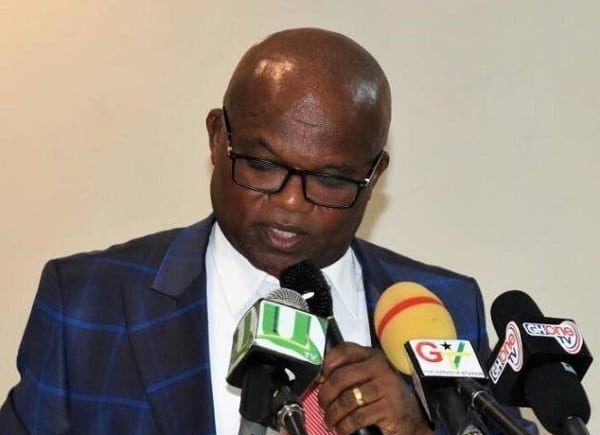 The Head of the Local Government Service, Dr Nana Ato Arthur, has advised communities not to downplay the seriousness of the coronavirus (COVID-19) pandemic and cautioned all to stick to the safety protocols as nobody was immune to the virus.
Dr Arthur particularly advised fisher folks to respect the COVID-19 protocols set out by the Ministry of Health and respect directives by the President aimed at containing the spread of the disease.

He said the COVID-19 pandemic was real and cautioned the citizenry to take the precautionary measures seriously.

He gave the caution when he donated some personal protective equipment (PPEs) and sanitary items to clinics, palaces and lorry stations in the Komenda Edina Eguafo Abrem (KEEA) Municipality of the Central Region as part of efforts to fight the COVID-19 pandemic.

The beneficiary facilities included the Elmina Polyclinic and the Komenda, Kissi and Abrem Agona clinics. The Elmina Police Station, the chief’s palace and lorry parks at
Elmina, Agona and Komenda also received some of the items.

Presenting the items to the Municipal Health Directorate in Elmina, Dr Arthur said the donation was to support the government’s efforts at controlling the spread of the COVID-19 pandemic.

Dr Arthur said his career as a politician partly began from KEEA as a District Chief Executive, Member of Parliament and Central Regional Minister before assuming the post of the Head of the LGS, saying he felt obliged to offer his support to the fight in the municipality.

Dr Arthur said though a lot of donations had been given by some institutions and organisations, “individuals must also do our part to support our communities because the fight will be won by collective effort”.

Ms Ampah-Bryant said the municipality had two suspected COVID-19 cases and that samples had been sent to Accra for testing with the results pending.

She said the KEEA assembly, in collaboration with the health directorate, had put in place a task force to educate the communities on COVID-19, precautionary measures, symptoms and the contacts to reach out to in an emergency.

She stated that the directorate had also received a list of addresses of travellers from their head office for contact tracing.

She thanked Dr Arthur for the gesture and called on other individuals and organisations to support the health directorate in these abnormal times with medical supplies and other essentials.