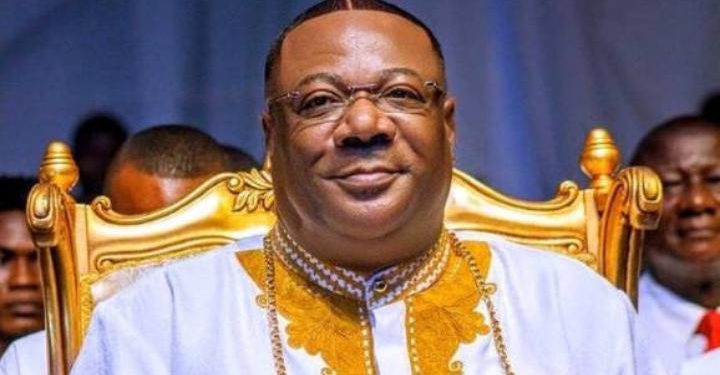 159
SHARES
881
VIEWS
Share on FacebookShare on TwitterShare on WhatsApp

Archbishop Nicholas Duncan-Williams has said the political leaders and security agencies in Ghana must pay attention to the “signs on the wall” and not “dare” or “ignore” them as far as the peace and stability of the country is concerned.

Using the Russia-Ukraine war as a reference point to sound the warning on Sunday, 27 February 2022 during his second sermon, the founder of Action Chapel International said: “This war in Ukraine and Europe, it just didn’t happen overnight; the signs [were] on the wall; the signs [have] been on the wall for some time now, and, if you study history carefully, you’ll see the signs on the wall, but, for whatever reason, people become very complacent and people get to a point where they lose the appetite to fight and they are so much into themselves and secure that they ignore the interests of others”.

Without being explicit about the signs he was talking about, Archbishop Duncan-Williams said: “There’s a parable in Twi that, ‘A gale of wind precedes a rainfall’. There are some winds that are blowing in this country and there are signs on the wall and, for whatever reason, it looks like we are ignoring it; we’re not paying attention”.

“I pray that we’ll rise to the occasion and we’ll reverse the signs on the wall because things don’t just happen”, he urged.

He continued: “Hear me: before they happen in the natural, it has already taken place in the spirit. I’m telling you. But, we have been desensitised. The enemy has succeeded to veil us and to desensitise us that we are seeing the signs on the wall and yet, we are bluffing. We are daring the signs and ignoring the signs”.

Buttressing his point with the scriptures, he said: “The Bible says: ‘Beware, when they say, ‘peace, peace’, then cometh sudden destruction like a woman in travail’”, warning: “Don’t be fooled. Ghana, we haven’t seen war before. Ask Sierra Leoneans and Liberians. Ask people from Ethiopia and other countries of Africa; they’ll tell you what war is like”.

He said: “What we saw in 1979 and 81 is not war, and I pray that we’ll never see war within our walls because you don’t know what war is; you don’t know; and, I pray that our leaders and our security forces, that nobody will provoke; that nobody will do anything or say anything that shall cause an event to happen in this country that will take the clock of Ghana back and will compromise our national security. Let it not happen in the name of Jesus”.

The Archbishop said: “We must not ignore the signs. What is happening in Ukraine is a wake-up call to the world, to Africa and to the leaders of Africa that you are on your own. You think you have friends; you don’t have any friends, you are on your own and we must never compromise our security and our peace”.

“We must never bluff and ignore the signs. They are written loud and clear. And never think that power and security and money is everything; they have their expiry dates. It’s a matter of time; things happen. May we not ignore the signs on the wall”, he noted.

Interestingly, nobody seem to care with the pronouncement of Duncan Williams but persons who made same predictions were either arrested, invited by the Police or detained.

Ghana have been in the news in recent weeks for how hardship seem to be taking over the country.

Fuel prices are at a record high with the cedis performance being abysmal in all fronts with the rate of unemployment above the roof.

Ghana have had a number of Coup Detat and these conditions today are same which necessitated it in those days.

Will IGP Dampare have the balls to invite Duncan Williams?

You Have No Power to remove Adwoa Safo from Parliament? – Speaker to NPP

You Have No Power to remove Adwoa Safo from Parliament? – Speaker to NPP