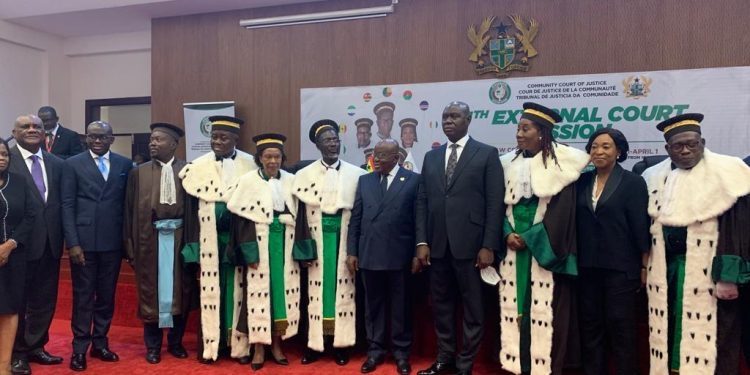 68
SHARES
377
VIEWS
Share on FacebookShare on TwitterShare on WhatsApp

The ECOWAS Community Court of Justice has awarded a cost of $750 against Ghana for wasting its time in a suit filed against the Government of Ghana over the controversial Agyapa deal.

This translates to about GH¢5,611.33 at current exchange rates.

The three anti-graft institutions filed the suit in July last year, questioning the Government’s move to collateralise the country’s gold without active engagement and consultation with Ghanaians, the true owners of the mineral resource.

They are thus praying the Court to pull the brakes on the deal and for the Ghana Government to follow due process in broaching the deal.

The Akufo-Addo Administration received intense public backlash on the deal led by civil society, compelling it to withdraw the deal. Strong indications however remained that the deal would be revisited.

When the case was called in the ECOWAS External Court session in Accra on Wednesday, March 23, 2022, a Chief State Attorney, Dorothy Afriyie Ansah told the Court that the Ghana Government needed one week to enable it to respond to the plaintiffs’ response to their filed defense.

Counsel for the plaintiffs, Olumide Babalola however did not take kindly to the prayer.

He lamented that the Ghana Government has had over one year to file all the necessary responses, and wondered why Ghana was now asking for an adjournment to enable it to respond. He told the court that it was an inconvenience to his side since they had to rebook hotels and change their flights. Consequently, Mr. Babalola said he had no option but to ask for a cost of one thousand dollars against the Ghana Government.

Counsel for the Ghana Government, Dorothy Afriyie Ansah, however, pleaded with the Court to reduce the cost to four hundred dollars ($400). She explained that the delay was not occasioned by the office of the Attorney General, but by her absence due to an ailment she suffered.

President of the Court, Hon. Edward Amoako Asante, not impressed with the explanation, wondered why no other lawyer took up the case in her absence.

He said that the Court was in Ghana for the sole purpose of the cases and did not have the luxury of such adjournments.

The Community Court further ordered the Ghana Government to file all the necessary documents by Monday, March 28, 2022, for the case to be heard on Wednesday, March 30, 2022.