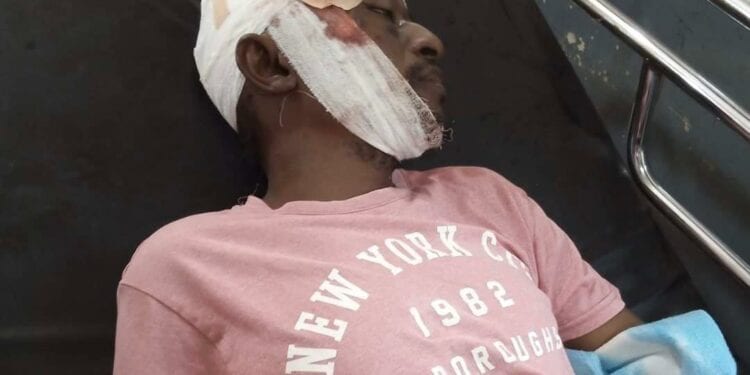 57
SHARES
318
VIEWS
Share on FacebookShare on TwitterShare on WhatsApp

A social activist and member of #FixTheCountry movement, Kaaka Anyass Ibrahim, popularly known as Macho Kaka, is reported dead after he was attacked by a mob on June 25 in Ejura in the Ashanti Region.
He is reported to have died this afternoon while receiving treatment at the Komfo Anokye Teaching Hospital. This comes hours after his family gave an account of what happened to him and demanded that justice be served.

Macho’s brother Wakas, who spoke to 3news.com said the perpetrators of the act must not be allowed to go free. “Our brother did not do anything to anyone. He was only expressing his views and so those who are responsible for the attack must be found and made sure they pay for their action”, he said.

The Economic Fighters League, a radical Nkrumaist movement mobilizing people at the grassroots to achieve economic freedom and justice for all, had also condemned the attack and demanded the assailants be arrested and held accountable.
But Macho unfortunately did not live to see the justice demanded for him.

Macho Kaaka, as he is known by many and his Facebook followers, uses social media to talk about developmental issues. He mostly highlights areas of his community that need urgent attention – deplorable, dilapidated and abandoned facilities and stalled projects Ejura community.

This, many thought was a good initiative meant to court the attention of duty bearers and prompting them to act, but it will not be long before he attracted opposition that will metamorphosed into enemies issuing threats and subsequently going after his life.

Details of the attack as narrated by victim’s brother

On the dawn of June 25, 2021, at about 1:30 am, as Macho walked home without any shred of feeling he would be attacked, a mob sprang up from the deep of darkness and pounced on him with clubs and stones hitting him multiple times in the head, the goal of the mob by assessing the injuries he sustained was to kill him, 3news,com gathers.

He is said to have shouted for help which drew the attention of some residents of Sabonline, a Zongo community in the Ejura township but the arrival of witnesses was too late as Macho was lying unconscious upon their gathering.

Macho Kaaka was said to have been quickly rushed to the Ejura Sekyeredumase District Hospital but there was little the hospital staff could do considering the level of his injuries and fearing for his life, he was immediately bound to an ambulance and transferred to the Komfo Anokye Teaching Hospital in the regional capital Kumasi for further treatment.

According to the brother of the victim, after initial x-ray examinations were done on his fractured skull, he was scheduled for an immediate surgical procedure to remove clotted blood from some fissures of his cranium.

Returning to angry and grieving friends of Macho Kaaka who had organized themselves into a company to in their capacity, find the perpetrators of the dastardly act, the brother of Macho suggested and admonished they first seek the advice and permission of the Sabonline Zongo Chief who in turn advised and directed them to the Ejurahene.

At the Ejurahene’s Palace, the Chief cautioned the youth not to take the law into their own hands and act in retaliation but to rather allow the police to take over the case.

According to Macho’s brother, the only ‘crime’ Macho Kaaka committed was taking photos and videos of abandoned projects, highlighting other areas in dire need of attention and sharing his opinions while soliciting that those things be fixed.

Filing of a police report.

Macho’s brother said they reported the incident to the police at about 2 am on the dawn of the attack but the police did not visit the scene until it was 3pm the next day, June 26, after the Ejurahene had cautioned the youth of the area to leave the case to the police and called the District Police Commander who gave them [the youth] the assurance that the police service will do everything within its capacity to bring the perpetrators to book.

In addition to interviews granted by eyewitnesses, there are voice messages which suggest some threats were made to the victim. In what appeared to be a fracas between Macho Kaaka and some persons believed to be bodyguards to the Municipal Chief Executive of Ejura Sekyeredumase, the people could be heard saying the activities of Macho on Facebook were making the governing New Patriotic Party unpopular in the area and that every means possible would be used to stop him.

This, an eyewitness who spoke on condition of anonymity, believes led to the said attack on Macho, The eyewitness also believes the attack has the backing of the Municipal Chief Executive, Sanusi Bamba, and is possibly funded by him.

A letter sighted by 3news.com addressed to one Kaaka Anyass Ibrahim presumably being Macho Kaaka and dated June 15, 2021 said the social activist was reported for “offensive behavior” for which he needed to be punished but upon interrogation of the complaint was cautioned not to repeat the behavior else he would be prosecuted.

The letter, signed by the Ejura Deputy Superintendent of Police reads in parts: “I have decided that no further action will be taken in this case, but you are informed that, if you are reported again, it may be necessary to take proceedings against you in respect to the latter case.”