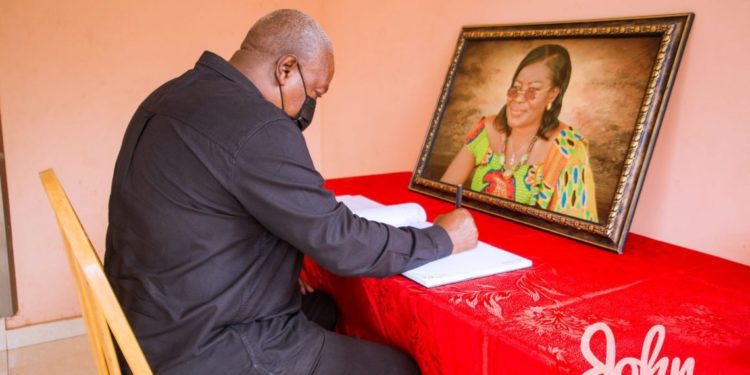 30
SHARES
169
VIEWS
Share on FacebookShare on TwitterShare on WhatsApp

Former President John Dramani Mahama has signed a book of condolence opened for the late Ama Benyiwa Doe by her family.

Mr. Mahama signed the book of condolence on Sunday, September 26, 2021.

In a statement following her death, Mr. Mahama described the former Member of Parliament who was also a former Central Regional Minister as “one of the most inspirational icons to have served our party, the NDC, and this great nation.”

She was not only a politician but also a gender activist and champion of women’s rights. Ama Benyiwa Doe was an embodiment of limitless courage, commitment, and passion for service.”

Mr. Mahama was accompanied by a former Chief of Staff, Mr. Julius Debrah, his Special Aide, Madam Joyce Bawa Mogtari, and other top officials from the NDC.