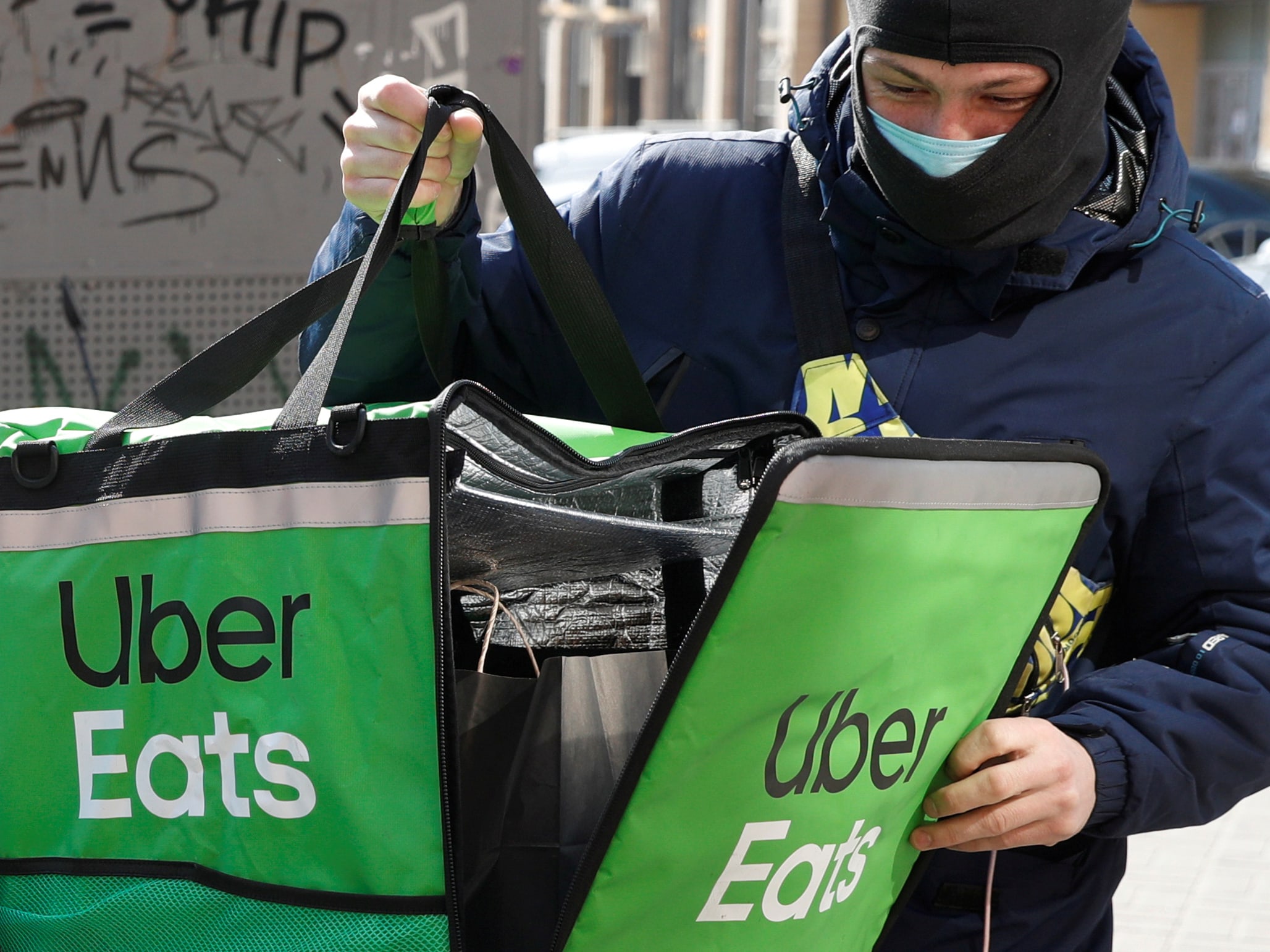 An Uber Eats food delivery courier closes a bag with an order during a lockdown, imposed to prevent the spread of coronavirus disease (COVID-19), in central Kiev, Ukraine April 2, 2020.

Check out the companies making headlines after the bell.

Gilead Sciences — The pharmaceutical company’s stock surged 13% in extended trading after a report that Covid-19 patients being treated with the company’s antiviral medicine Remdesivir are making rapid recoveries, according to initial data from a clinical trial.

Boeing — Shares of the airplane manufacturer soared 8% in extended trading after the company said it is planning to resume commercial aircraft production at its Seattle-area factories as early as April 20. Boeing also plans to implement new physical-distancing measures to help prevent the spread of Covid-19 once it restarts production.

Uber — The ride-share company’s stock shot up 6% in extended trading after the company gave a preliminary update regarding its first-quarter results. Uber said it expects its GAAP revenue to be reduced by an estimated $17 million to $22 million in the first quarter, and an estimated $60 million to $80 million in the second quarter because of a financial assistance program it implemented for drivers and delivery people amid the Covid-19 pandemic. The company also said it is taking a writedown of $1.9 billion to $2.2 billion on its investments in the first quarter. Uber withdrew previous financial guidance provided in February.

Peloton Interactive — The exercise bike company’s stock dipped more than 5% in extended trading after the company’s shares hit a 52-week high earlier on Thursday. Peloton has recently seen increased downloads of its workout app as consumers gravitate towards at-home workouts amid the coronavirus pandemic.

Lululemon — The athletic apparel retailer’s stock climbed 2% in extended trading after the company announced the departure of CFO Patrick Guido. Guido will leave the company May 8 to take a leadership position outside of the apparel industry. Lululemon said it is currently in the process of searching for a new CFO.

General Electric and Ford — Both the industrial conglomerate (5%) and the automaker (3%) saw their stocks rise in extended trading after they signed a $336 million federal contract to manufacture 50,000 ventilators to help coronavirus patients. Production of the ventilators is slated to start next week at a Ford facility in Michigan.

General Motors — Shares of the auto manufacturer jumped 4% after the closing bell. The company currently has a federal contract under the Defense Production Act to produce 30,000 ventilators for $489.4 million. While GM’s contract, which it shares with Ventec Life Systems, has the ventilators at a price point of $16,300 each, the contract signed by GE and Ford Thursday places them at $6,720 per unit.

Intuitive Surgical — The surgical equipment company’s stock climbed 5% in extended trading after the company posted a double beat on earnings and revenue in the first quarter. Intuitive Surgical reported earnings of $2.69 per share excluding some items on revenue of $1.10 billion, while analysts expected earnings of $2.54 per share on revenue of $1.03 billion, according to Refinitiv.

Facebook — Shares of the social media giant rose 2% after the market closed. CEO Mark Zuckerberg announced earlier on Thursday that employees will be allowed to work from home through the summer and that the company will not host any large events until at least July 2021. “Most Facebook employees are fortunate to be able to work productively from home, so we feel a responsibility to allow people who don’t have this flexibility to access shared public resources first,” Zuckerberg wrote in a post on Facebook.