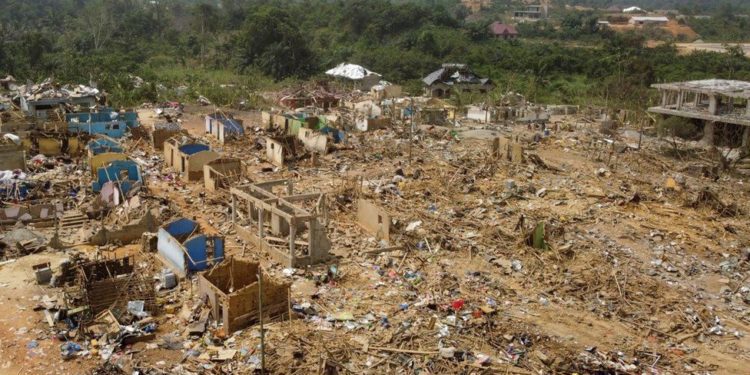 74
SHARES
413
VIEWS
Share on FacebookShare on TwitterShare on WhatsApp

The minister of Lands and Natural Samuel Abu Jinapor on behalf of government has imposed a 6 million dollars fine on Maxam Company limited producers of the very explosives which destroyed Appiatse in the Western Region.

On January 20th 2022, what should have been a normal mid morning for residents of Appiatse turned into a rather devastating accident when a truck loaded with explosives exploded right in the town after an accidents.

Over 17 people were killed in the blast with dozens severely wounded.

Houses destroyed and properties blown away by the strong blast from the explosives.

It was a sad incident which shook Ghana with many asking what were the measures put in place in transporting such a dangerous products.

Weeks on, the contradiction of what actually caused the accident lingers on.

However, the minister of Lands and Natural resource through a release has said government is imposing 6 million dollars cedi equivalent on Maxam Company the very company responsible for the production and transportation of the explosives.

The company will have to pay 1 million dollars first before their license which has since been revoked will be reinstated.

Below is what the release of the minister says