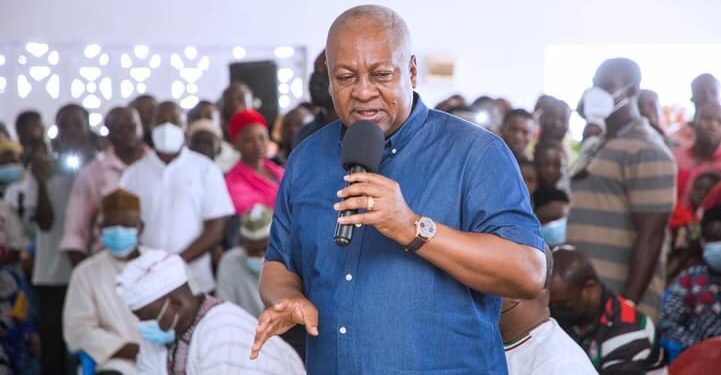 The 2020 flagbearer of the opposition National Democratic Congress (NDC), John Mahama, has accused Ghanaians of been “hypocritical” in their criticism of the Akufo-Addo government

The former President said, Ghanaians only find their voice of reproach whenever the NDC is in power but fail to do the same when the New Patriotic Party (NPP) takes the reigns of government.

“That is what is referred to as hypocrisy by the westerners. Hypocrisy is what is depriving the society of development because people don’t speak the truth anymore…we have to use the same standards for everyone, and that’s one of the problems we have,” he said.

Mr Mahama, in an interview with Techiman-based Akina radio, recounted how the NPP peddled falsehoods against himself and his administration in the build-up to the 2016 general elections.

I stood in Techiman here and challenged Nana Akufo-Addo and his government to prove to Ghanaians now that they are in power, who actually owns DKM and account to Ghanaians the monies they retrieved from DKM. It even turned out that some of the staff of the microfinance scams were appointed by the Akufo-Addo government,” he said.

There were reports in 2016 that former First Lady, Lordina Mahama, owned the now-defunct microfinance company that collapsed after taking a lot of money from prospective investors.

But Mr Mahama told the teeming crowd in Techiman as part of his ‘Thank You’ tour of the Bono Region that all those were part of a calculated attempt by his opponent to discredit him.

“You can suppress the truth but it would definitely manifest. They told a lot of lies…They said I own a hotel in Dubai, they showed some pictures, and I challenged them to look out for the hotel and sell so we can support the country with it. Up to now, nothing has come out of it,” Mr Mahama noted.

Mr Mahama added, “They also said my wife, Lordina and I have saved an amount of $100 million in a Swiss Bank account.

“All these are the kind of falsehoods they peddled against us because they realised that if they do not paint us black in the sight of Ghanaians, there’s no way they could win power based on our development track record on what we’ve done for the country”.

You remember how they brought some pictures of some buildings in America and said they belong to Ofosu Kwakye, Ablakwa and Ofosu-Ampofo Ablakwa. This is the dubious nature of the NPP. They are only good in political propaganda. I don’t even know if they have a school that trains them in that or they develop that in its nature, but they are very good at telling lies on people”. He noted

He called on the people to be fair in their judgments by subjecting the Akufo-Addo government to scrutiny.