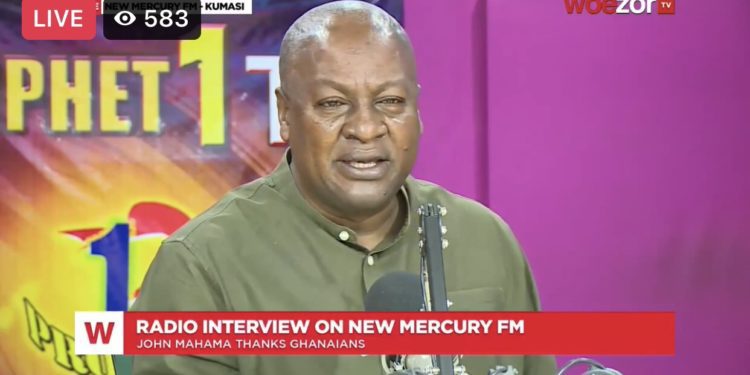 236
SHARES
1.3k
VIEWS
Share on FacebookShare on TwitterShare on WhatsApp

Former President John Mahama has stated unequivocally that his government built the Kejetia Market in Kumasi.

Notwithstanding, he was grateful for the King of the Asante Kingdom Otumfuo Osei Tutu II for his immense contribution to make sure the dream of getting a modernized market for The Ashanti Region becomes a reality.

Mr Mahama who is going round the country to thank Ghanaians for their support in 2020 elections even though his desired outcome wasn’t met was on Mercury Fm in Kumasi to speak on issues of National development.

The host, in seeking for clarification on whose project was the Kejetia Market stated that there’s is wide misconception in Kumasi about who built the over 200 million dollar project.

He stated there are persons who believe the project is the sole effort of the Asante King Otumfuo Osei Tutu.

John Mahama laughed for a while before explaining that, the project was a government initiative with collaboration from Brazil as that was where the loan came from.

He was emphatic stating that the project is his project as the loan agreement was sent to parliament to be approved.

However, he added because Otumfuo is a father figure who cannot be ignored in such a big project his blessings was asked for and he did his best by helping government with his influence especially when it came to relocating the market women for the project to continue.

He added that, during his time, anytime he goes to Kumasi, he goes with the contractors to brief the Asantehene about the Kejetia market project and what they are doing as a government for the project to become a reality.

He said Otumfuo in his capacity as a king of the Asante Kingdom did his part but he was not in position to go for a loan which parliament further approved for a project like Kejetia to commenced.

He revealed that the mode of the loan agreement was different as the contract was set in a way that the Kumasi Metropolitan Assembly was going to be fully in charge of the Market revenue collection.

He took time to thank former mayor of Kumasi Kojo Bonsu for his dedication to project and all relevant persons who contributed in making sure the concept of having a modern market in Kumasi became a reality.

He went further to say that, the projects was in two phases as the first phase is what is currently completed and in use.

The second phase was approved by parliament before he left office.

He thus called on President Akufo Addo to make it a point to make sure all abandoned projects in the Ashanti Region are worked on because ultimately when these projects are completed, it’s Ghanaians who will benefit from them.