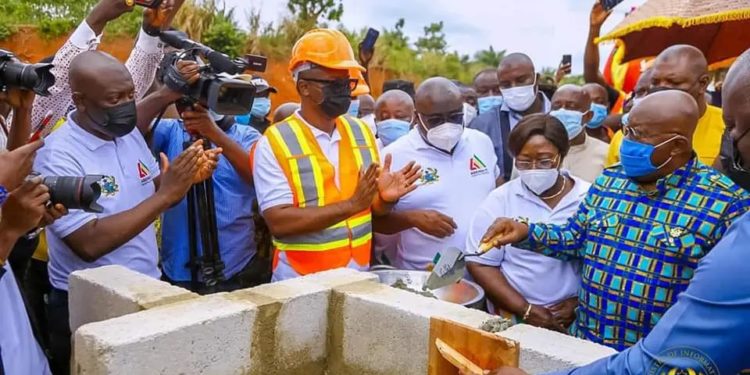 266
SHARES
1.5k
VIEWS
Share on FacebookShare on TwitterShare on WhatsApp

President Nana Addo Dankwa Akufo-Addo has admitted that his flagship health programme, which is aimed at building a total of 111 district and regional hospitals across the length and breadth of the country, was ambitious.

The programme christened ‘Agenda 111’ was announced at the peak of the fight against the deadly coronavirus disease.

In his Update No. 8 in May, 2020, President Akufo-Addo announced the need to invest in healthcare as he admitted then that the novel disease had exposed the deficiencies in successive government’s efforts to embark upon projects in the health sector.

“There are 88 districts in our country without district hospitals; we have six new regions without regional hospitals; we do not have infectious disease control centres dotted across the country; and we do not have enough testing and isolation centres for diseases like Covid-19. We must do something urgently about this. That is why Government has decided to undertake a major investment in our healthcare infrastructure, the largest in our history. We will, this year, begin constructing 88 hospitals in the districts without hospitals.

“Each of them will be a quality, standard-design, one hundred-bed hospital, with accommodation for doctors, nurses and other health workers, and the intention is to complete them within a year. We have also put in place plans for the construction of six new regional hospitals in the six new regions, and the rehabilitation of the Effia Nkwanta Hospital, in Sekondi, which is the regional hospital of the Western Region.”

But after the promised one year, not even a single one of the hospitals has emerged.

“Mr Speaker, I have to report that, like all major construction projects, it is evident that the initial schedule we gave for the completion of the Agenda 111 was overly ambitious,” President Akufo-Addo admitted while delivering the State of the Nation address on Wednesday, March 30.

“Identifying suitable sites around the country, for example, has turned out to be even more problematic than had been anticipated.

“I am able to say that a great deal of the preparatory work has now been completed, and work has started at 87 of the 111 sites. I have been assured that preliminary work on the remaining 24 sites is ongoing.”

He reiterated that the projects will be commissioned before he leaves office on January 7, 2025.

He noted that the projects will create 33,900 jobs for constructions workers and when completed 34,300 jobs for health workers.

Akufo Addo expresses Joy over the Passing of E-Levy

Akufo Addo expresses Joy over the Passing of E-Levy