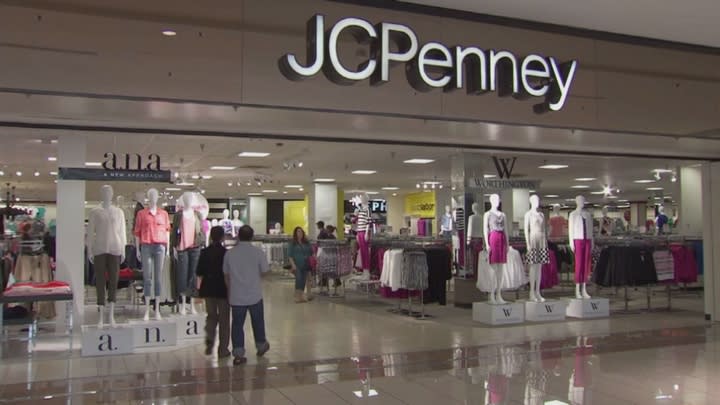 Check out the companies making headlines in midday trading.

J.C. Penney — Shares of J.C. Penney tanked more than 28% after Reuters reported the retailer is exploring a bankruptcy filing. The coronavirus pandemic forced J.C. Penny to close stores and it disrupted its turnaround plans.

Bank of America — The bank’s stock tumbled more than 6% Wednesday after reporting that profits dropped 45% in the first quarter and said loan losses and lower interest rates would hurt the bank throughout the coronavirus crisis. The company set aside $3.6 billion for loan-loss reserves because of the pandemic’s impact on the economy.

Occidental Petroleum — Occidental equity slid 12% in midday trading after the company said it will pay its quarterly dividend to Berkshire Hathaway in stock. Occidental said in filing that it will sell about 17.3 million OXY shares to Berkshire Hathaway worth $200 million as part of dividends owed to Warren Buffett’s conglomerate. Berkshire in 2019 agreed to a $10 billion preferred stock investment in Occidental as part of its takeover of Anadarko Petroleum. The funding came at a steep price, however, with the preferred stock accruing dividends to Berkshire at 8% annually.

Tesla — Shares of the electric carmarker rose more than 4% after Goldman Sachs initiated coverage of the stock with a buy rating. The Wall Street firm said the quick economic downturn will be an opportunity to get in at a reasonable price on the electric vehicle market leader. Goldman also slapped an $864 per share 12-month price target on the Elon Musk-led electric automaker.

Netflix — Shares of the streaming company jumped more than 4% to hit an all-time high, as the so-called, stay-at-home stocks outperform the broader market, and after several bullish analyst calls. Pivotal raised its target on the stock to a Street high of $490, which is about 14% above where the stock currently trades. Piper Sandler also reiterated its overweight rating, while Stifel and Cowen raised their targets to $440 and $445, respectively.

Teladoc Health — Shares of Teladoc Health rose 3.5% after the telemedicine company issued upbeat guidance. The company said it expects to see first quarter revenue above prior forecasts, as the virus outbreak creates unprecedented demand for its services.

Goldman Sachs — Shares of the bank slipped 0.8% on Wednesday, outperforming the broader market and its peers, after reporting a steep decline in profits for the first quarter but improved trading revenue. Goldman earned $3.11 in earnings per share on $8.74 billion in revenue, with trading revenue growing by 28%.

Citi — Shares of Citi fell 4% on Wednesday after the bank reported a sharp drop in profits for the first quarter. The company’s consumer banking division reported a net loss of $754 million, compared with a profit of $1.3 billion in the same period last year. Citi’s net income was $2.52 billion for the quarter, down 46% from the prior year, and it hiked loan loss reserves by $4.9 billion to deal with the economic crisis.

Amazon — Shares of the e-commerce giant were in the green, hitting a new all-time high for the second straight day. The stock gained about 0.4% as the company continues to benefit from consumers shopping online as people stay home in an effort to slow the spread of the coronavirus.

Subscribe to CNBC PRO for exclusive insights and analysis, and live business day programming from around the world.

Life in Jail Worse During COVID-19

US reaffirms commitment to partner Ghana in fight against Covid-19

US reaffirms commitment to partner Ghana in fight against Covid-19