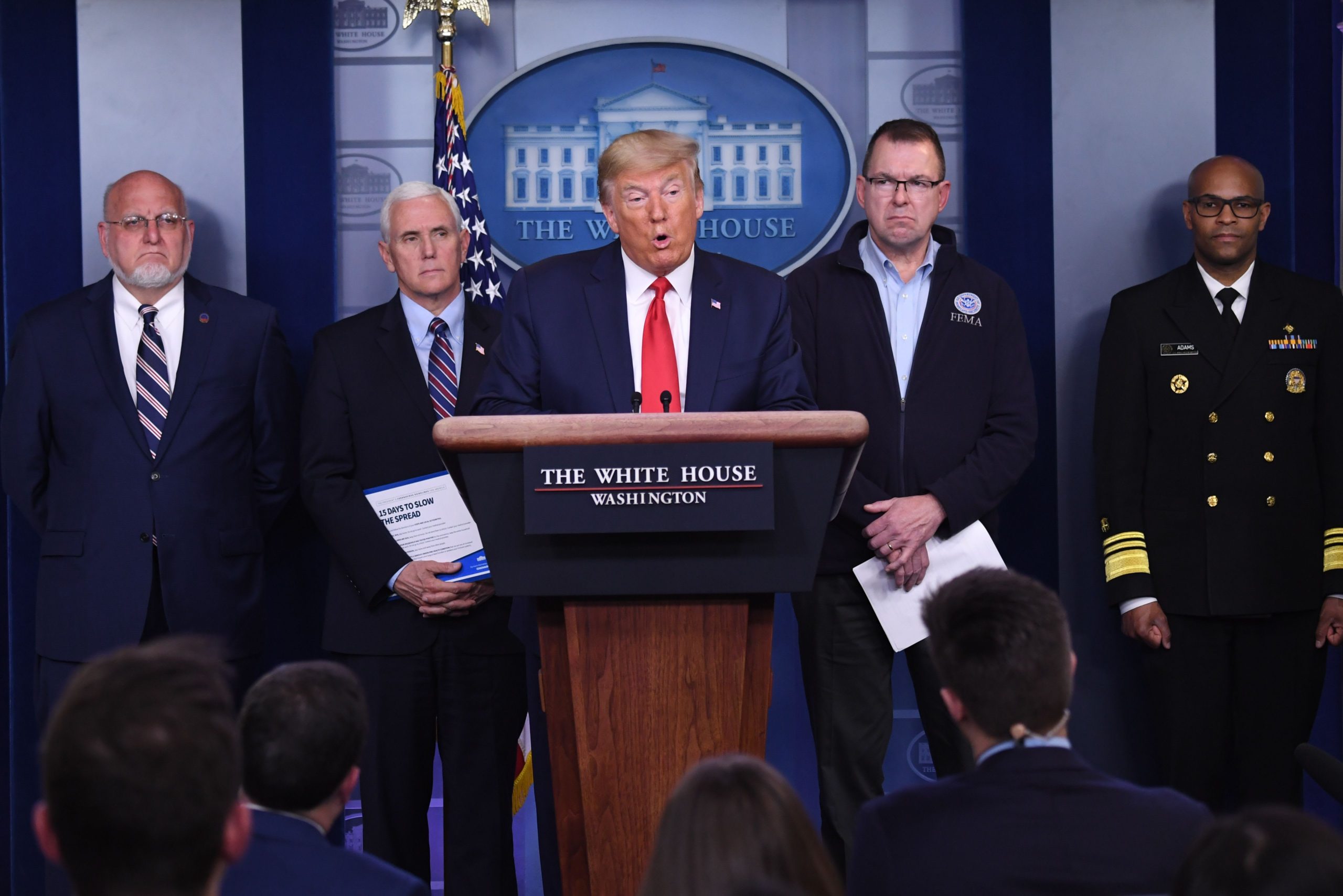 US President Donald Trump (C), flanked by US Vice President Mike Pence (2nd L), and other members of the coronavirus task force, speaks during the daily briefing on the novel coronavirus, COVID-19, at the White House on March 22, 2020, in Washington, DC.

WASHINGTON – Trump White House appointees pressured government health officials to make an unproven malaria drug available to the public to treat the disease caused by the new coronavirus without a doctor’s supervision, according to internal emails published by Vanity Fair on Friday.

The pressure tactics caused panic and pushback from scientists and doctors at several federal health agencies, who refused to suspend drug regulations in order to distribute the potentially dangerous treatment to the public outside of hospitals.

The report adds a new layer to the looming crisis facing the Trump administration over its efforts to promote and procure drugs containing chloroquine and hydroxychloroquine. Long used to treat malaria and select auto-immune diseases, chloroquine has not been proven effective to treat Covid-19.

On Friday, CNBC reported on the findings of a clinical trial of chloroquine that was halted amid safety concerns after researchers cited a “primary outcome” of death among patients who were given high doses of chloroquine.

But Trump’s public comments touting the drug as a “game changer” have helped to trigger a worldwide shortage of the drugs, in spite of warnings from American and international scientific groups about potentially deadly side effects.

It is still too early to determine what, if any, efficacy chloroquine has in treating Covid-19. Yet since the start of the pandemic early this year, Trump administration officials have pressed health agencies to stockpile chloroquine drugs.

In the United States, chloroquine was Initially given only to Covid-19 patients sick enough to require hospital admission, and only under the close supervision of doctors. But as nationwide cases soared past 100,000,  health officials started looking for ways to distribute the drug to pharmacies for use at home, Vanity Fair’s Katherine Eban reported.

By giving pharmacies their own stockpiles of chloroquine, doctors across the country could prescribe it for “off-label use” by people who had been infected by the coronavirus, but who were neither hospitalized nor under constant supervision by a doctor.

On March 24, a internal panel of top government health experts warned the White House against making chloroquine available to the public outside of clinical trials, saying its safety was “not supported by data from reliable clinical trials or from non-human primates,” according to Vanity Fair.

Despite the warning, two weeks later Trump boasted at a daily coronavirus press conference, “we have millions and millions of doses of it — 29 million to be exact.” He added: “We’re just hearing really positive stories, and we’re continuing to collect the data.”

That night, Brett Giroir, the assistant secretary for health in the Department of Health and Human Services, emailed top appointees at the Food and Drug Administration and Federal Emergency Management Agency and stressed the need “to flood NY and NJ with treatment courses” of chloroquine.

“Hospitals have it. Sick out patients don’t. And can’t get. So go through distribution channels as we discussed. If we have 29 million perhaps send a few million ASAP? WH wants follow up in AM,” wrote Giroir, according to Vanity Fair.

In addition to making the drug available to pharmacies, the administration planned to partner with Oracle, the tech giant founded by billionaire and prominent Trump donor Larry Ellison, to track what happened to the patients using chloroquine at home.

The plan triggered frantic pushback within federal health agencies against the idea of giving pharmacies enough chloroquine for doctors to prescribe it off-label for Covid-19, and against running what would have amounted to a loosely controlled, nationwide trial of the drug using patients who were not under constant care.

In response to Vanity Fair’s reporting, an HHS spokesperson said the agency ultimately decided against the plan. Trump has not mentioned chloroquine as a treatment for Covid-19 during his daily briefings for nearly a week. The White House didn’t immediately respond to a request for comment.

The emails also shed light on explosive new allegations this week by Dr. Rick Bright, the former director of the government’s premier vaccine research lab, that he was removed from his post because he would not approve the widespread distribution of chloroquine drugs to pharmacies for distribution to Covid-19 patients.

“Specifically, and contrary to misguided directives, I limited the broad use of chloroquine and hydroxychloroquine, promoted by the Administration as a panacea, but which clearly lack scientific merit,” said Bright, who until earlier this week was director the Biomedical Advanced Research and Development Authority.

“I rightly resisted efforts to provide an unproven drug on demand to the American public,” Bright said in a statement Wednesday. “I insisted that these drugs be provided only to hospitalized patients with confirmed COVID-19 while under the supervision of a physician.”

Bright requested an Inspector General’s investigation into his demotion, and has requested he be reinstated to his post.

There are no proven therapies to treat Covid-19, which has infected more than 2.7 million people worldwide and killed at least 191,231 as of Friday morning, according to data complied by Johns Hopkins University.