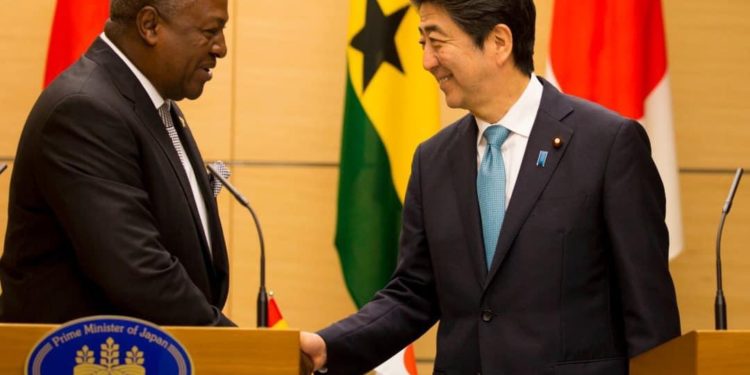 52
SHARES
290
VIEWS
Share on FacebookShare on TwitterShare on WhatsApp

Shinzo Abe was today gunned down by a man while he was delivering a speech in the southern part of Japan.

Mr. Mahama however recall memories of his encounter with the late Prime Minister and the projects he helped Ghana to initiate through the collaboration of his government at the time and the Japanese government.

I am greatly shocked by the assassination of Prime Minister Shinzo Abe. His legacy will be remembered fondly by Ghana, Africa and the world at large for a long time to come.

As President of Ghana, through my side meetings with him at international conferences and two official visits to Japan, I found him to be a leader passionate about opening up Japan’s role on the world stage, inclusive of expanding Japan-Africa relations.

I recall our last meeting in May of 2016, which led to the official publication of the restoration of the Yen loan portfolio to Ghana and the announcement of Japan’s commitment to assist Ghana with a number of important new and ongoing projects. These included the Tema motorway interchange project, expansion of the Sekondi fishing harbour, expansion and upgrade of the Noguchi Memorial Institute for Medical Research into an Advanced Research Centre for Infectious diseases, and the construction of a new bridge over the Southern Volta river at Volivo, among others.

At this time, my thoughts and prayers are with his bereaved family and the Japanese people in the wake of this senseless crime.