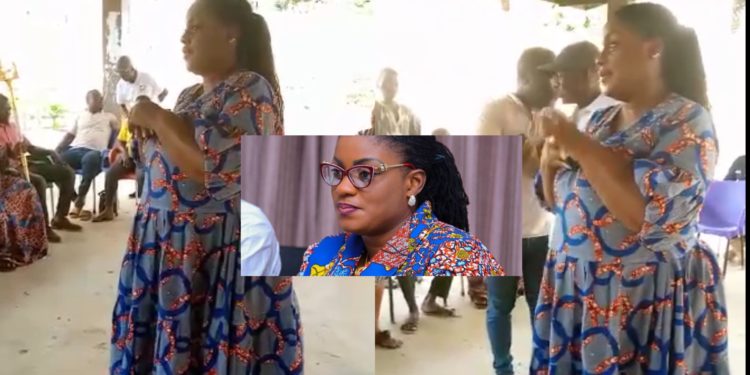 118
SHARES
656
VIEWS
Share on FacebookShare on TwitterShare on WhatsApp

It was a sad and troubling situation as the youth of Mangoase led by the Okada riders of the community stormed a meeting organized by the MP to meet the chiefs and people and asked the meeting to close and the MP get out of the town.

The youth cite incompetence, neglect and lack of empathy on the part of the member of parliament as the reason for their action and do not want any more meetings from her but their road fixed, their toilet completed and their market reopened.

They cite times where the MP even brought contractors to some of their meetings and indicated the road is going to start in a few days and they never saw any work on the road.

Their wives and mothers are losing their pregnancies, their children are in dilapidated classroom blocks, they have nowhere to ease themselves, the road to the connecting communities and their ChPS compound are unmotorable. The once vibrant town of mangoase with industries like Cocobod, Cadbury and an active railway and train station is completely dead.

They are upset that the MP in her 5years in office has shown no leadership and commitment towards the community and are unwilling to hear anything from her other than action.

“When the contractors come to the road and the toilet is commissioned, she can come and meet us, we will even meet her at the site and then she can tell us whatever she needs to tell us, go and check the Presby primary school, the building can collapse on our children any moment from now.” Retorted the Leader of the Okada boys.

They described the Honourable member of parliament as a con artiste who has found a way around her internal politics and only concentrates on how to become a candidate but delivers nothing to the constituency once he wins the general elections, riding on the fact that it’s a stronghold of the NPP.

The youth have vowed not to allow her to have her way this time and would force her to deliver or else have nothing to do with her.

Her personal bodyguard had to whisk her away sped off in her Landcruiser leaving behind some of her entourage who had to plead with the boys for safe passage out of the town.

In a similar incidence, a planned meeting with the people of Aboabo (a small community after ADAWSO) was cancelled after some youth blocked the road preventing the MP from entering the community. The people of Aboabo also cited the absence of a classroom for their children who currently sit and study under a tree. They pointed to an abandoned classroom block since 2004 which was at the roofing level. The MP promised to complete the abandoned school building and started work on it in 2017 and it still remains uncompleted after 5 years and their children are at the mercy of the weather.

The Citizens in Akuapem North seem to be up in arms recently with the member of parliament and Municipal Chief Executive as the constituency has recently seen a number of such protests and this includes the youth of Larteh protesting about their road and the people of OKORASE Domeabra protesting about their Bridge all of which remain untouched and undone despite the protests.