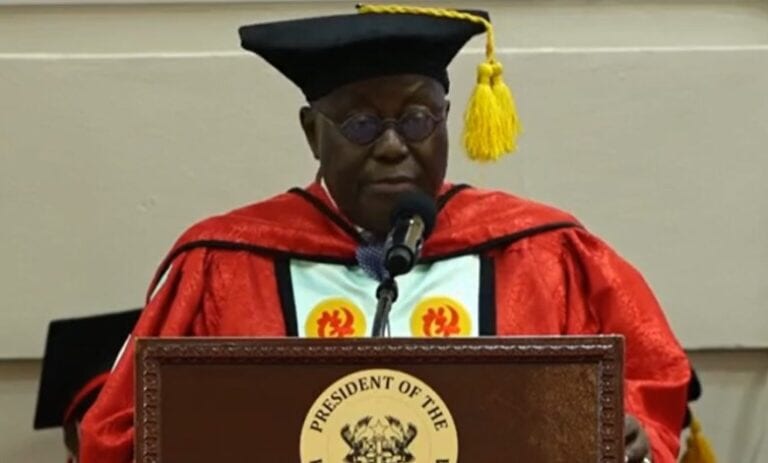 Even as journalists are brutalized with government sending its communicators to go after dissenting views, President Akufo Addo has said he does not see any culture it Silence in Ghana.

He has however challenged claims of ‘culture of silence’ in the country under his presidency.

According to the President, traditional and social media have continued to be vibrant with people freely speaking up hence unfair for anyone to tag his government with ‘culture of silence’.

Speaking at a ceremony at University of Cape Coast for an honorary Doctorates Prez Akufo Addo said;

“It cannot be that everyone has a right of reply except members of the government and officialdom. Nor can it be that challenging an opinion expressed by a journalist constitutes an attack on press freedom. What I believe may be lacking sorely in our society today is the need to listen to each other more. Knowledge has never been a gift granted exclusively to one group. We must listen, and hear each other more.

“And, for me, personally, I find it ironic that the Presidency of a man who has been and continues to be the most vilified political figure of his generation can be accused of presiding over a “culture of silence. There is no midnight knock on the door in Ghana for authors of dissenting views, nor will there be during my presidency,”

He stressed: “I belong to the Danquah – Dombo – Busia political tradition, one whose forebears, at great personal sacrifice, fought for the democratic, open, free system of government we are enjoying today in Ghana. They propagated the concept of democracy at a time when it was not, in Africa, a fashionable concept. Indeed, the philosophy of the New Patriotic Party (NPP) coincides with that of the Fourth Republican Constitution. It is the dominant political philosophy in the world today, and has stood the test of time”

The ceremony was graced by the Chancellor of the University Sir Sam Jonah who was first to speak about the ‘Culture of silence in the county’ in a virtual address in April 2021.