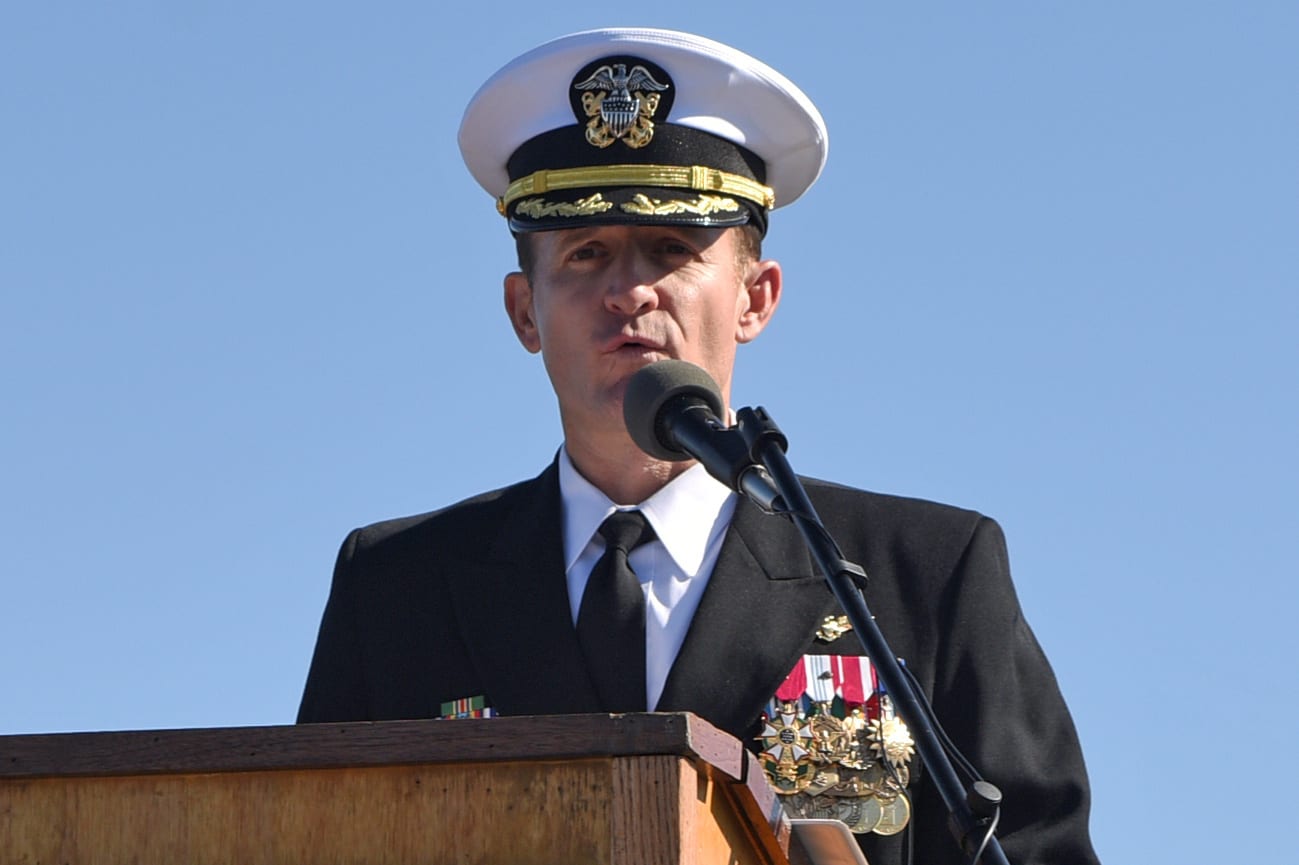 Captain Brett Crozier addresses the crew for the first time as commanding officer of the aircraft carrier USS Theodore Roosevelt during a change of command ceremony on the ship’s flight deck in San Diego, California, U.S. November 1, 2019.

WASHINGTON — The U.S. Navy’s top officials recommended Friday that the captain relieved of duty after sounding the alarms of a growing coronavirus outbreak aboard an aircraft carrier should be reinstated.

The decision to reinstate Navy Capt. Brett Crozier’s command of the aircraft carrier USS Theodore Roosevelt sits with Secretary of Defense Mark Esper. The Pentagon boss, who was briefed on the recommendations following a U.S. Navy investigation, has yet to sign off on the reinstatement of the captain. He is expected to make a decision Friday.

The latest revelation follows a messy string of events that resulted in the resignation of the acting Secretary of the Navy Thomas Modly.

Modly relieved Crozier after the captain’s letter pleading for help to mitigate the spread of the deadly virus aboard the aircraft carrier was leaked to the media. Modly then took a 35-hour trip, which cost taxpayers $243,000, to address the crew of the USS Theodore Roosevelt.

In the address, delivered via the ship’s loudspeaker, Modly doubled down on his decision to relieve Crozier and called the former vessel’s captain “naive” and “stupid.” Hours later Modly issued an apology to the Navy.

“I also want to apologize directly to Captain Crozier, his family, and the entire crew of the Theodore Roosevelt for any pain my remarks may have caused,” he said in a statement on April 6.

A day later, Modly handed in his resignation to Esper, who then announced that he had tapped James McPherson, undersecretary of the Army, to be the new acting Navy secretary.

‘Sailors do not need to die’

In a four-page letter, first reported by the San Francisco Chronicle, Crozier described a worsening coronavirus outbreak aboard the warship, a temporary home to more than 4,000 crew members. At the time, more than 100 people on the ship were infected.

“We are not at war. Sailors do not need to die. If we do not act now, we are failing to properly take care of our most trusted asset — our Sailors,” Crozier wrote. “The spread of the disease is ongoing and accelerating.”

The coronavirus exposure aboard the USS Theodore Roosevelt, which is docked in Guam, follows a recently completed port call to Da Nang, Vietnam.

Fifteen days after leaving Vietnam, three sailors from the USS Theodore Roosevelt tested positive for the virus. The infections were the first reports of the coronavirus on a U.S. Navy vessel at sea.

All crewmembers of the USS Theodore Roosevelt have been tested for the coronavirus, with 840 positive and 4,098 negative results,” the service wrote in an April 23 release. Of the total cases, 88 sailors have recovered and one sailor died.

Oncology Practices Are Businesses Too