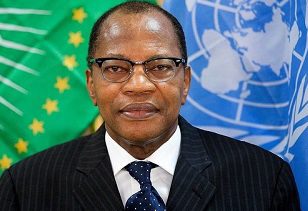 289
SHARES
1.6k
VIEWS
Share on FacebookShare on TwitterShare on WhatsApp

Top Ghanaian Diplomat and former Minister of Education under the National Democratic Congress (NDC) Dr. Mohammed Ibn Chambas who was contracted by the government to fashion out a path of consensus between Majority and Minority sides in parliament has failed to achieve its result, MyNewsGh.com has been hinted.

This was after the government pulled out all its arsenals and options including roping in Asantehene Otumfuo Osei Tutu II as well as members of the clergy to seek to convince the minority to play ball with the government in the business of parliament.

The Chief Whip of the Majority, Frank Annor Dompreh earlier indicated what the work of Dr Ibn Chambas was:

“Parliament is taking practical steps in consensus building with the assistance of very Eminent citizens such as Dr Ibn Chambas. We are putting the past behind us with the support of Mr Speaker. This country must succeed. Let’s keep working on this with the Nation in mind.”

Key on the agenda for the government is the passing of the controversial electronic transaction tax popularly known as e-levy.

However, MyNewsGh sources indicate that the talks have fallen through as the minority MPs’ leadership failed to reach any deal with Ibn Chambas.

The Minority MPs wondered how a government that is actively seeking to reduce their number in parliament through legal subterfuge could be trusted in any negotiation.

Sources told MyNewsGh that Ibn Chanbas managed to work “a charm offensive” on Speaker Alban Bagbin who has since softened his “hardline posture” against the government and its agenda that includes the controversial e-levy.

Strongly opposed to all forms of consensus is Minority Leader Haruna Iddrisu and his Chief Whip Muntaka Mubarak who insist “government knows what it must do” if it is seeking consensus with them.

The two have been in court supporting their Embattled colleagues in court, Cassiel Ato Forson and James Quayson who have been dragged to court by the government for various alleged infractions.