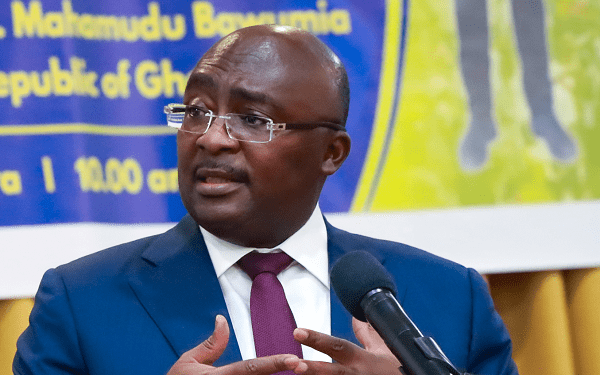 82
SHARES
453
VIEWS
Share on FacebookShare on TwitterShare on WhatsApp

Vice President Dr. Mahamudu Bawumia says the opposition NDC has developed a deliberate plan to frustrate government programmes and policies with the sole aim of disrupting the development agenda.

He said the NDC will only succeed if government fails to tell its success stories.

“There is no better group to respond to these attacks to set the record straight and to match them boot for ‘chalewote’ than the Majority Caucus of Parliament. So we need to tell our story in terms of what we have been able to accomplish,” he said.

Addressing a workshop for the NPP Majority Caucus and members of the Executive in the Eastern regional town of Mpraeso, Dr. Bawumia urged for the strengthening of the bonds between Parliament and the Executive to help fulfil the promises made to Ghanaians and further earn their trust to continue governing the nation.

According to him, before the NPP assumed office in 2017, there were hardships in the country, adding that the NPP government has reduced the level of hardships.

“We need to let Ghanaians know how we have been able to reduce, not completely eliminate, but to reduce the hardships. The hardships were there before we came into government in 2017 and we have done so much and this is an area we should not shy away from. In the area of social interventions, our government has been just marvelous,” he emphasised.

Deputy Majority Leader, Alexander Afenyo-Markin said, despite the numerous interventions by the Akufo-Addo government, majority of Ghanaians continue to live in pain and hardship.

He advised the NPP party to take some of these concerns of the populace seriously.

While these concerns are sometimes unfounded, unpalatable and unjust, there are times that they are the plain truth. By this I mean that they are realities facing many of the people who voted us to power to serve them and our country. Therefore, I urge every one of us to see such comments, the good or bad, as reminders. While we have done a lot at various levels to transform our country and the economy for the better, there is still much work to be done,” he said.

Alexander Afenyo-Markin reiterated the need for the Party’s communicators to tell the populace about the numerous achievements of the government.
Source:Myjoyonline.com
Previous Post

Full Text: NDC Has Responded to The Akufo Addo led Government on Corruption issues with Facts