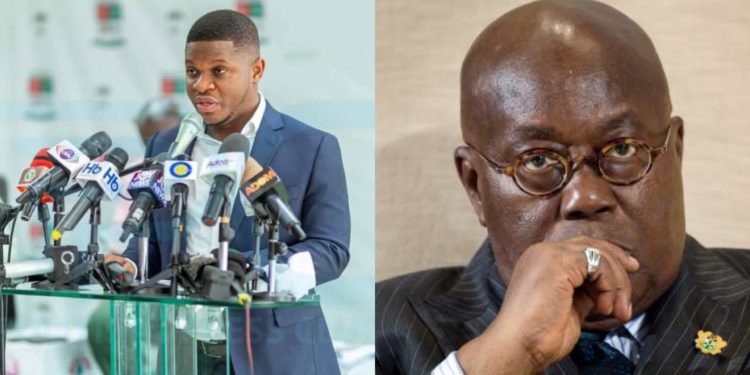 The NDC has yet again proved it’s that one political party which is for the general good of Ghanaians.
Earlier yesterday, President Akufo Addo abruptly announced the suspension of the reversal of the benchmark policy.
In its current form, prices of imported items were going to see an astronomical increment if the benchmark policy was reversed.

Akufo Addo and Bawumia after mismanaging the Economy are bent on running Ghana into a perpetual ditch hence their thirst to even tax the air Ghanaians breath.

Mr.Gyamfi said, the Akufo Addo-Bawumia led government is a government of double standard and cannot ask Ghanaians to endure the terrible consequences of their mismanagement while they continue to loot National resources.

While they have attributed all their failures to Covid-19, they are still living like Arabian Kings on the taxes of Ghanaians while asking Ghanaians to endure the hardship they have brought to them.

Ghana Union of Traders (GUTA) among other important stakeholders threatened demonstrations and legal actions if Prez Akufo Addo and Bawumia fails to heed to the wise calls of the traders which was echoed by NDC with the reversal of the Benchmark policy.

President Akufo Addo has thereby directed GRA and the finance minister Ken Ofori Atta to hold on with the reversal for broader consultation an indication that just as many of their rushed policies, Akufo Addo and his next in Command Bawumia actually didn’t think through the benchmark reversal policy before announcing their decision to go ahead with its implementation.

It’s one of those decision which has once again proven that Akufo Addo and Bawumia are bereft of ideas in governance.
They have over borrowed and has mortgaged every single asset of Ghana but with nothing to show.

The NDC with its executives and MPs have saved Ghanaians a dozen time from the claws of cluelessly inept Akufo Addo and his hatchet men by shooting down many backward policies and directives from the Government like the benchmark reversal policy among others .

While the Aluta Continues with the draconian e-levy in parliament, the suspension of the Benchmark reversal shows the NDC is poised to become a government which listen and will drive Ghana back to the right track of given the nod to govern by Ghanaians

Reacting to the directive of Akufo Addo to put on hold his move to reverse the benchmark policy, Mr Sammy Gyamfi took to social media to thank all those who kept the fire on the government to make sure their quest to bring further hardship to Ghanaians has been crashed in the first attempt.

Folks, this is VICTORY for the Ghanaian people.

Kudos to GUTA, the Importers and Exporters Association of Ghana and all those who stood against the callous decision by government to reverse benchmark value discounts on imports.

Together, we have averted what was going to be one of the most draconian and devastating economic policies in Ghana’s history. We have demonstrated that the power of the people is powerful than the people in power.

But until this draconian policy is totally dropped by government, we must rest not. Aluta Continua! Victoria Acerta!

INSENSITIVE AKUFO-ADDO/BAWUMIA GOVERNMENT CONTINUES TO PUNISH GHANAIANS FOR THEIR ECONOMIC MISMANAGEMENT AND RECKLESSNESS AS THEY REVERSE DISCOUNTS ON BENCHMARK VALUES OF 44 CATEGORIES OF IMPORTED GOODS.

Good afternoon distinguished ladies and gentlemen of the media.

Before we proceed further and given the fact that this presser is the first for the year 2022, I wish to on behalf of the leadership of the NDC extend to you, our friends from the media best compliments of the season and wish all those following this event across the length and breadth of Ghana, a very fruitful and prosperous new year. “Yema mo nyinaa afehyiapa”.

Distinguished friends from the media, the NDC is utterly appalled by the decision of the insensitive Akufo-Addo/Bawumia government to reverse benchmark value discounts on selected imported goods, effective yesterday, 4th January, 2022. The reversal of benchmark value discounts is a draconian policy which will adversely affect the living conditions of all us irrespective of our social backgrounds and political affiliations.