The governing New Patriotic Party (NPP) has suspended its April 25, 2020 parliamentary primaries indefinitely in accordance with the President’s ban on public gatherings in the wake of the Coronavirus pandemic in Ghana.

The decision to suspend the primaries was decided at a National Steering Committee meeting held today, Tuesday, April 14, 2020.

NPP was to use the primaries to elect parliamentary candidates in constituencies where it has sitting Members of Parliament, ahead of the 2020 general elections.

The party said in a statement stated that: “The National Steering Committee, by reason of Article 10(10)(1) of the party’s constitution, is the body responsible for overseeing the daily management of the party, and thus, mandated to “act on behalf of the party on urgent matters” such as in the circumstances we find ourselves as a party and nation owing to the COVID-19 pandemic. It would, indeed, be recalled that the President of the Republic, on April 12, 2020, extended, pursuant to EI 64, the ban on social gathering including religious and political activities by additional two weeks. i.e. from April 12 to April 26, 2020, as part of measures to stop the spread of the deadly Coronavirus in the country.”

Portions of the NPP’s statement concluded by saying: “In the light of this development, the party is unable to hold the primaries as planned, and has accordingly postponed same till further notice. The party regrets all inconveniences that this may occasion, and hopes to hold this crucial exercise, sooner than later.”

The NPP has 169 sitting Members of Parliament out of the total 275 seats in parliament.

The party has already held primaries for orphan constituencies; areas that did not have sitting Members of Parliament.

Nomination fee for the parliamentary primaries was pegged at GH¢20,000 and an additional GH¢200,000 for filing of forms.

The leadership of the party also charged all aspiring parliamentary candidates other than the sitting Members of Parliament a “Party Development Fee of GH¢30,000”.

Nominations were opened on January 20, 2020 and closed on Thursday, February 20.

President Nana Akufo-Addo also filed his nomination forms to contest in the NPP’s presidential elections scheduled for the same date as the parliamentary primaries.

He is expected to contest unopposed as he was the only one to have picked forms and submitted same as at Thursday, February 20, the deadline for filing of nominations.

During the period for nominations, some aspirants faced difficulty in picking up forms.

Even barely two days to the closure of nominations for the primaries, some aspirants still faced challenges in getting access to the forms.

Some complained that efforts to pick up nomination forms at the constituency and regional levels had been futile.

In the Ashanti Region for instance, the regional executives of the NPP were accused of deliberately hoarding nomination forms to protect sitting MPs in the region, a situation the Regional Executives denied.

The Suame constituency was one of the few in the region who faced this problem.

Economy in trouble as case numbers shoot up 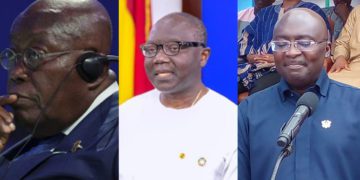