NPP Youth of Juaben protest against rejection of MCE 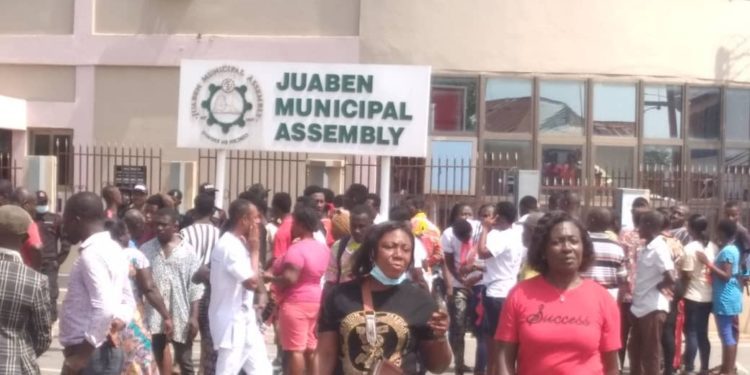 24
SHARES
133
VIEWS
Share on FacebookShare on TwitterShare on WhatsApp

Hundreds of youth of Juaben affiliated to the ruling NPP, are reported to have threatened to deal with members of the Juaben Municipal Assembly for rejecting the President’s nominee for Municipal Chief Executive, Alex Sarfo Kantanka.

The irate youth say they would not allow the Assembly Members to stifle the development of the Municipality because of their selfish interests. Police personnel deployed ahead of the confirmation blocked the entrance to the Assembly to prevent the youth from having access to the hall. The Police reinforcement from Kumasi helped to contain the huge crowd as they tried to escort the Assembly Members out of the building.

This is the second time they have rejected Dr. Alex Sarfo Kantanka who is the current Constituency Chairman of the NPP. Only 10 out of the 26-Member Assembly voted YES to his nomination while 15 voted NO, with one ballot rejected.

Voting to confirm the MCE was originally scheduled for October 29, 2021, but the Assembly Members boycotted the exercise on the grounds that they felt threatened by the heavy police and military presence.