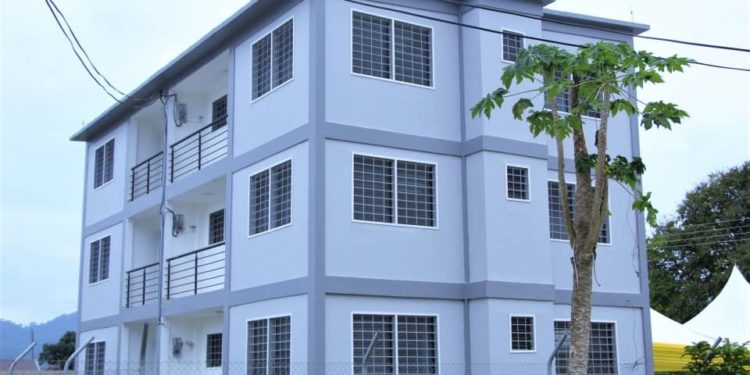 91
SHARES
505
VIEWS
Share on FacebookShare on TwitterShare on WhatsApp

The Minister of Finance Ken Ofori-Atta and Wife Prof Lamendorf Ofori-Atta through the Ken and Angela Foundation under the auspices of Okyenhene Osagyefuo Amoatia Ofori Panin have built and handed over a 6-unit bedroom edifice to the Kyebi Government Hospital in the Eastern Region.

At a brief handing over ceremony on Friday, August 13,2021 at Kyebi, the Etwienanahene, also the Ahenenanahene of Akyem Abuakwa Traditional Area , Barima Kwaku Duah on behalf of the Ken and Angela Foundation said the Kyebi government Hospital serves a larger population beyond Abuakwa South Municipality however it was observed that Medical Doctors and other essential healthcare workers were reluctant to accept posting due to accommodation challenges in the area.

He said one of the priority areas of the foundation is improving quality healthcare in Kyebi and Akyem Abuakwa by extension.

“One of the fundamental requirements in the development of any society is the provision of Good Healthcare. It is indisputable that the vital component in the provision of quality healthcare is by ensuring that its healthcare personnel are treated properly with respect and dignity in all areas of their livelihood. This is a key factor in motivating personnel to give off their best which in turn boost health delivery and improves healthcare “. He said .

Barima Kwaku Duah also stressed that the foundation has provided Medical logistics and supports to the Kyebi Government Hospital.

According to Dr.Richard Nii Darku Dodoo, Medical Superintendent of Kyebi Government Hospital, due to inadequate accommodation, some essential clinicians posted to the facility were yet to assume office.

He was therefore hopeful that the accommodation facility gifted the hospital will help ameliorate the housing challenge which has bedeviled the hospital for decades.

The Abuakwa South Municipal Health Director Augustina Nartey told Starr News the Kyebi Government Hospital is a referral center for health facilities in the Municipality and other surrounding districts, therefore, needs enough of the essential healthcare workers provided accommodation closer to the facility to enable them respond quickly during emergency situations.

Decent accommodation challenge remains a major setback to clinicians posted to peri-urban and rural areas in the country.

The situation has resulted in many physicians refusing posting to such areas creating huge gaps and inequitable distribution of health workforce.

Currently, about 50% of medical doctors in the country are concentrated in the Greater Accra region while about 20% are in the Ashanti region