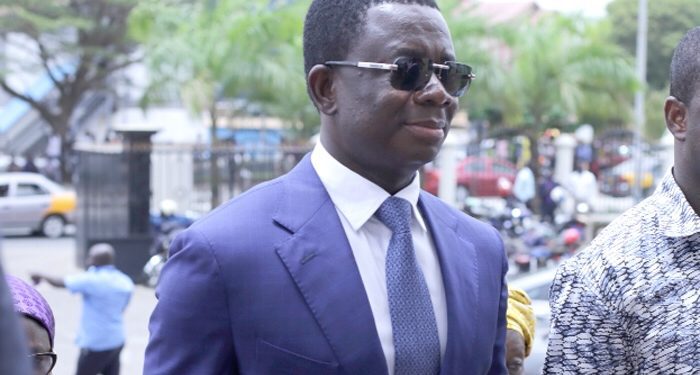 102
SHARES
566
VIEWS
Share on FacebookShare on TwitterShare on WhatsApp

Dr. Stephen Opuni, the former Chief Executive Officer of the Ghana Cocoa Board has through his lawyers, filed another motion asking Justice Clemence Honyenuga to recuse himself for allegedly exhibiting “bias tendencies and open hostility towards” their client.

Justice Honyenuga, a Justice of the Supreme Court, who is sitting with additional responsibility as a High Court judge has also been accused of giving preferential treatment to the Attorney General.

“The conduct of His Lordship Justice Clemence Honyenuga since I opened my defence is one of open hostility towards me, his acts and conduct is such that justice cannot be said to be seen to be done,” the affidavit in support of the motion filed on Friday, December 10, 2021, stated.

This latest action is the third application against Justice Honyenuga’s handling of the case of former COCOBOD boss, and businessman Seidu Agongo accused of causing financial loss to the state and contravention of the Public Procurement Act has been full of controversies.

Two other similar attempts in the past to get the judge to step down due to a number of alleged “unfavourable and biased” actions have not been successful.

With the latest motion at the High Court, Dr Stephen Opuni prayed that “based on the averments contained in the above, it is only fair and just that the trial judge recuses himself from further hearing of the suit.”

Dr Opuni referenced his affidavit on two occasions where Justice Honyenuga imposed dates on the parties, and would not hear his counsel out even on medical grounds.

“That I state further that this conduct of the learned judge in unilaterally imposing dates did not happen when the Prosecution was presenting its case. During that time, the Learned Judge always agreed with the lawyers before adjourning the case. Unfortunately, the Learned Judge has refused to grant me the same conditions and facilities which were afforded to the Prosecution.”

According to Dr Opuni, who is the First Accused person, the trial judge “has exhibited open hostility towards me since I opened my defence and this is evident where he (the learned judge), in open court, apart from not hearing my Counsel with respect to adjourned dates, bangs his files on his table when giving dates and on his own, orders the court to rise whiles angrily screaming ‘court rise’. Indeed, at the last hearing on the 9th day of December, 2021, the learned trial judge unilaterally adjourned the suit at a time my lawyer was on his feet and addressing him with respect to the proposed adjourned dates and walked away to his chambers.”

Dr. Opuni stated that, he is convinced that the conducts of Justice Honyenuga breached his right to a fair hearing and also constitute a breach of Rule 3 (5) of the code of conduct for judges and magistrates, which stipulates that:

The applicant also accused Justice Honyenuga of making prejudicial comments in the ongoing trial that he presides on.

“That the fact that the judge is biased towards me is evidence by his prejudicial comment which he made in court on the 9th day of December 2021 where he stated in open court that the evidence of my witnesses cannot exonerate me save my own evidence. This shows a clear case of bias and that the learned judge has already made his mind even though my first witness has not yet completed his evidence in chief. I add that this comment is further evidence that the learned trial judge would not consider the evidence of my witness even though he has not completed his evidence in chief.”

The affidavit further stated that, “That during the examination in chief of my first witness, when my lawyer sought to elicit a response from my witness on portions of the findings of fact made by the judge in his ruling dismissing our application for submission of no case including the above, the learned trial judge stopped him and furiously informed him that he was not going to allow my lawyer to ask questions by referring to his ruling. This Conduct is one of bias since the questions to be asked are based on the express finding made by the judge with respect to the submission of no case in which the judge made extensive references to the evidence of various prosecution witnesses affirming the basis of his ruling.

“That I state that unless the learned trial judge recuses himself from hearing this matter, I would be denied a fair trial since I would be prevented from conducting the case in a way which I am entitled to by making references in this instance to specific portions of the ruling.

That I state further that the fact that the learned trial judge is biased is further evidenced from his conduct of the 2nd day of December 2021, where the learned trial judge, even though aware of the fact that I had the constitutional right of deciding the mode of calling witnesses, initially objected to DW1 giving evidence. This was most unfortunate in that at no point in time during the presentation of the case by the Prosecution did he seek in any way whatsoever and or howsoever to instruct on the sequence of calling their witnesses.

“That I state further that the learned judge has repeated on numerous occasions since I opened my defence that his diary at the Supreme Court does not afford him enough time hence his act of imposing these said dates. It is thus clear to me that I will not get a fair trial as my trial would be rushed through by his Lordship the trial judge”.

The returned date on the motion to be moved by counsel for Dr. Opuni is on December 16, 2021.

In July 28, this year, the ordinary bench of the Supreme Court in a 3:2 majority decision prohibited Justice Honyenuga from hearing the case.

But the ordinary bench’s ruling was overturned in a 4-3 review application in October 12.

Meanwhile, the first Defence Witness for Dr Opuni, Mr Charles Kwao Tetteh Dodoo, a former Director of Finance at COCOBOD is expected to continue with his Evidence-in-Chief today.

Dr. Opuni, Seidu Agongo and Agricult Ghana Limited are standing trial for 27 charges for allegedly causing financial loss to the state, defrauding by false pretences, conspiracy to commit a crime, abetment of crime, money lingering, corruption by a public officer and contravention of the PPA Act.

Together, they are accused of causing a financial loss of over GH¢217 million to the state through the sale and purchase of the controversial Lithovit Liquid Fertiliser, which according to the prosecution, was never tested.

They have all pleaded not guilty to the charges and have been granted bail.