People have sacrificed a lot for the NPP more than Bawumia, He should be grateful even if he loses the NPP Flag Bearer Slot- Arthur Kennedy 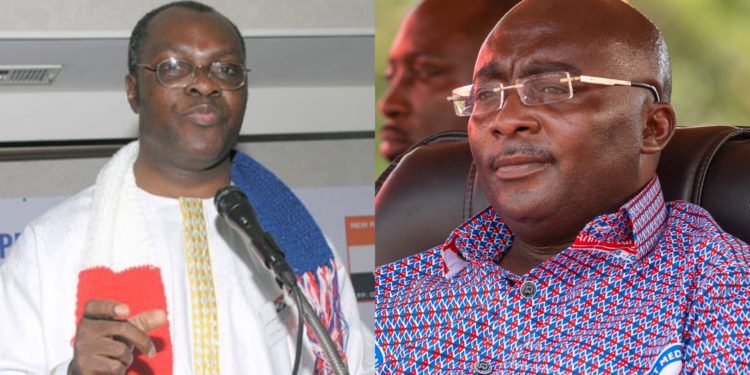 230
SHARES
1.3k
VIEWS
Share on FacebookShare on TwitterShare on WhatsApp

With Akufo Addo no longer eligible to contest by virtue of the constitution, the NPP will be electing a new leader for the 2024 polls.

The election of the Flag bearer of the party is scheduled for December 2023 and already leading members like Dr Bawumia who is currently the Vice President, John Kwadwo Kyeremanten who also serves as Trade Minister, Joe Ghartey, Boakye Agyarko among others have all expressed interest in contesting to lead the party.

However, A member of the governing New Patriotic Party (NPP) has averred that Dr. Bawumia even in an event that he does not win the flag bearer position should be grateful for the opportunity he has been given in the NPP because a lot more people sacrificed for the party than he has done.

Dr. Mahamudu Bawumia was picked as an unknown Northerner to balance the ticket of the party in 2008 and has since remained second in command to Akufo Addo.

Dr. Arthur Kennedy has therefore advised him to be grateful even if he’s not picked as a presidential candidate for the NPP.

Dr. Athur Kennedy posited that Dr. Bawumia was selected as against p[arty faithfuls who had sacrificed and worked for the party for years.

The medical doctor and politician were speaking on Metro television.

He described as bogus the assertion that the NPP is not a party that wants a Northerner to be their presidential candidate.

According to him, we have to be careful how we frame things as politicians because, in politics, you would be forced to eat your own words.

He insisted that Dr. Bawumia was selected as someone unknown from the north to balance the ticket.

He said there are a lot of people who put far more toil including, myself who have never had the opportunity near the benefit Bawumia has had, and so if you were not chosen as a candidate, then he should thank the NPP for the blessings that were bestowed on him and work to support the one who is chosen as the candidate.

Law students to stage a Protest over Mass ‘failures’

Law students to stage a Protest over Mass ‘failures’