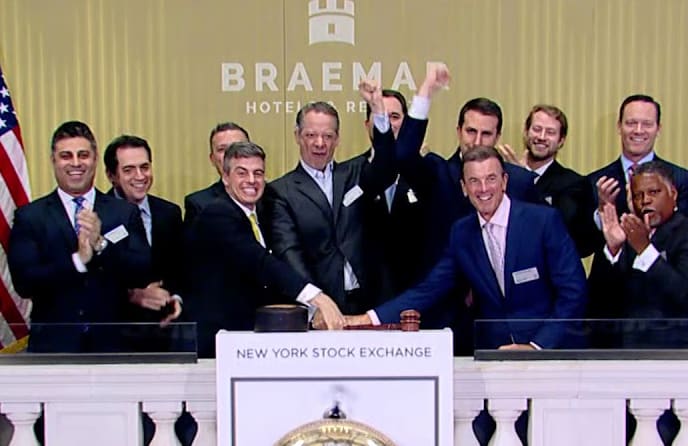 Monty Bennett and executives from Braemar Hotels and Resorts ring the closing bell at the NYSE on April 25th, 2018.

Even as the U.S. small business relief program is set to reopen Monday with fresh funding, the full extent that public companies tapped the emergency facility is only now becoming clear.

More than 200 public companies applied for at least $854.7 million from the government program that was billed as for small businesses without access to other sources of capital, according to Washington D.C.-based data analytics firm FactSquared.

That includes $126.4 million for three public companies affiliated with Texas hotelier Monty Bennett. One of those firms, Ashford Hospitality Trust, applied for $76 million in 117 separate loans, the most by a single company, according to regulatory filings.

The government’s Paycheck Protection Program sparked outrage after its initial $350 billion allotment quickly ran out and it was revealed that big public companies secured loans while hundreds of thousands of small businesses seeking relatively tiny amounts were left in limbo.

Last week, the Small Business Administration attempted to close that loophole, saying that big public companies “with substantial market value and access to capital markets” aren’t eligible and that firms that already tapped the fund had two weeks to return the PPP money.

Since then, companies including Ruth’s Hospitality Group and sandwich chain Potbelly have followed Shack Shack in returning their PPP funds.

But the data from FactSquared, which uses a machine-learning bot to trawl regulatory filings to produce an overall picture of the PPP, shows the full extent that public companies have successfully navigated the government’s program.

Banks including JPMorgan Chase and Bank of America have also come under fire after reports that bigger customers got better treatment and were generally much more successful in tapping the PPP than small mom-and-pop businesses, leading to allegations that lenders unfairly prioritized some clients. The loans are forgiven if business owners can show they used the money for approved purposes like payroll.

After media reports flared up last week, FactSquared CEO Bill Frischling modified an artificial intelligence program called Margaret to find mentions of PPP in regulatory filings. Frischling, a former journalism major who has worked at AOL and Gannett, founded FactSquared in 2017 to create a searchable database of all of President Trump’s public remarks.

He says his website, which also notes when companies return funds, can be a resource the public uses to hold the government program accountable. So far, 11 companies have returned $75 million to the PPP.

Another $310 billion has been approved for the program, and demand is expected to be high when it reopens Monday. To deal with the expected volume, the Small Business Administration told lenders Sunday that it would pace entries into its loan portal and capped any single bank to 10% of the dollars in the program.

“We had all this information we were already looking at it, we just had to put the AI on it,” Frischling said in a phone interview. “We’re confident that if a company disclosed it in a filing, we got it.”

Notably, the total excludes massive car dealer AutoNation, which says it applied for — and will return — $77 million from the PPP, because the firm hasn’t disclosed the moves in regulatory filings.

When reached by CNBC last week, several companies said they had no intention of returning the funds, claiming that they had limited access to other sources of money and the program would help them to pay their employees.

The same goes for the three companies affiliated with Monty Bennett. Ashford Hospitality Trust, where Bennett is chairman and a large shareholder, was able to treat each individual hotel property as a separate business when filing for PPP. They applied for 117 of the loans, getting $38 million so far, the most disclosed by any company. Loans for another $38 million were still being processed.

“We plan to keep all funds received under the PPP, which were provided as a result of the application process and other specific requirements established for our industry by Congress,” the Bennett-run companies said April 25 in a statement.