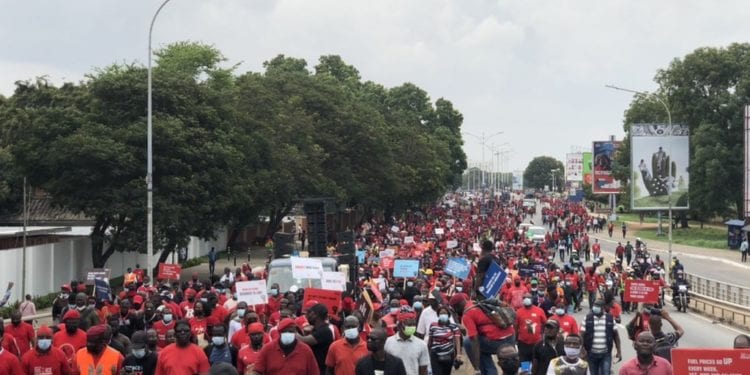 68
SHARES
380
VIEWS
Share on FacebookShare on TwitterShare on WhatsApp

The General Secretary of the opposition National Democratic Congress (NDC) has charged President Akufo-Addo to remove vigilantes recruited into the country’s security agencies.

Johnson Asiedu Nketia made the call when he addressed members of the party’s youth wing ahead of their ‘March for Justice’ protest on Tuesday. He accused the President of filling vacancies in the security agencies with members of various vigilante groups. Thus, damaging the reputation of, especially the Ghana Police Service (GPS) and Ghana Armed Forces (GAF).

“The protectors of the country are getting a bad name because of the actions of President Akufo-Addo’s vigilantes. It has brought division between citizens and security personnel because those killing us now, are clad in police and military uniforms. They have been given guns and when they kill civilians it further deepens the division.

“This has not been the relationship between civilians and security personnel since independence. So what happened that now our protectors are shooting us like we are grass cutters?” he quizzed.

According to him, the current “rift” between the civilians and security agencies could be detrimental to the nation’s security system since the institutions rely on the citizenry for intel.

“As a democratic leader, President Akufo-Addo must restore the peace between civilians and security personnel. He should remove his vigilantes from the security agencies and bring back unity,” he stressed.

Mr Nketia further called for a thorough investigation into the military brutalities that have been recorded in the past week.

He insisted that perpetrators must be dealt with in accordance with the law and victims of such occurrences must be duly compensated.

The NDC embarked on a ‘March for Justice’ demonstration Tuesday against what they call “the growing levels of insecurity, lawlessness and impunity” under the New Patriotic Party (NPP) administration.

The Police provided security during the protest after declining to do so earlier, with the explanation that the event is likely to be a Covid-19 spreader.

The protest led by the NDC youth wing will had the full backing of the Inter-Party Resistance Against the New Voters Register (IPRAN), a group made up of six other political parties who have expressed their support for the cause.

Twene Jonas throws yet another Dirt on Afia Schwarzenegger, Alleges She uses Charms to sell her mineral water

WADR: Breaking Down the Issue of Akufo Addo Paying His Wife

WADR: Breaking Down the Issue of Akufo Addo Paying His Wife