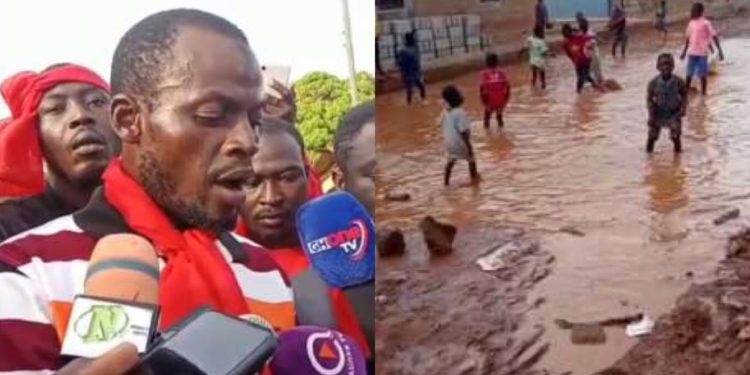 55
SHARES
307
VIEWS
Share on FacebookShare on TwitterShare on WhatsApp

A contractor working on Zogbeli drainage system has caused the anger of residents of the area over what they described as poor project currently being executed by the contractor.

Zogbeli is one of the populated suburbs in the Tamale Metropolis, with its dwellers largely being businessmen and civil servants.

Secretary of Concern Youth of Zogbeli, Mr. Abdul Fatawu Yakubu addressing Journalists in the area said the contractor on site who happens to be the Northern Regional Chairman of NPP has no goodwill to deliver quality work.

According to him, there was overjoy among residents of the area when the project was awarded, but little did they know their hopes and inspirations will not be met.

He said the ongoing drainage system by the NPP Northern Regional Chairman is frustrating and a threat to their lives.

“We are aware that we the inhabitants are those who will be saddled with future problems resulting from the shoddy works that is being done and we hope to avert any future disasters by bringing this to light for the right thing to be done by Chairman Samba”.

Mr. Abdul Fatawu cataloguing the problems associated with the drainage mentioned that the contractor has failed to relocate some electricity poles along the drains which are now situated on the road, with some poles being in the drains.

“The contractor destroyed main water lines and left them unattended for weeks and has failed to properly relocate some of the pipelines leading to some of the drains being constructed on top of some pipelines. Some houses, whose water service lines were destroyed, still do not get water up till date,” he said.

According to him, the slow pace of the poor project has resulted in issues of insecurity and loss of livelihoods as some residents whose fence walls and containers were destroyed continue to wait for the works to be completed before they rebuild.

He said the Concern Youth of the area will not tolerate the continued marginalization of the community by any group of persons in politics.

Mr Abdul-Fatawu therefore called on all stakeholders concerned especially the department of Urban Roads to as a matter of urgency direct the NPP contractor to do what is required of him.

In furtherance, some of the agitated residents spoke to the news team after the press conference concerning the ongoing construction.

A resident, Mma Asana appealed to the contractor stating, “We are begging the contractor to do quality work for us, the whole Community is in mess, we have been cut off from several homes.”

Johnnie Hudges Question Bawumia over why he never Talked on the Covid app he launched if it was useful.

Johnnie Hudges Question Bawumia over why he never Talked on the Covid app he launched if it was useful.