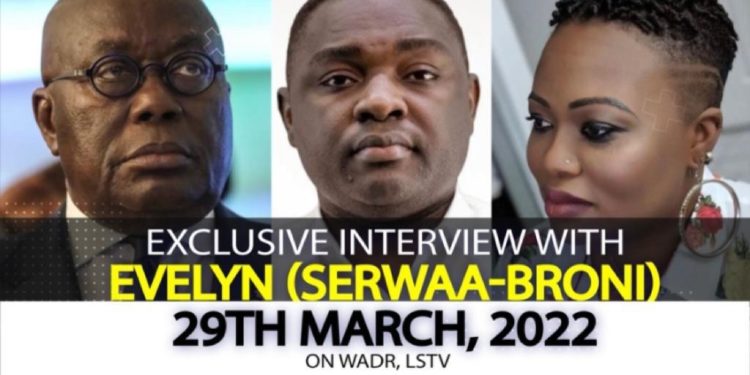 309
SHARES
1.7k
VIEWS
Share on FacebookShare on TwitterShare on WhatsApp

The highly anticipated interview of the lady who has been at the centre of series of controversies surrounding Ghana’s President Akufo Addo will focus on the relationship between Nana Addo and Serwaa Broni among other top secrets Serwaa Broni has not shared with any media house.

The interview forms part of the healing process Miss Broni has said she badly needs due to the terrible experience she had to go through knowing Nana Addo.

She has in her own capacity opened up some aspect of the issue but held onto to the critical aspect of her relationship with Nana Addo due to certain circumstances but is now prepared to let every single cat out of the bag out.

Weeks ago, Serwaa Broni shook the corridors of power by stating categorically that she had direct access to the President with evidence of she even flying with the President in the Presidential jet.

Since there, there have been a topless picture of Nana Akufo Addo in the company of Serwaa Broni in a bedroom.

The said picture which is believed to be a video has generated series of conversation online of which Serwaa Broni will speak the real truth on among others too secrets.

She has also made claims of how National Security boys led by Hopeson Adorye staged a robbery attack on her for fears that she had some damaging materials of President Akufo Addo which would have been a big blow to his re election ambitions in 2020.

The interview is packed with the truth and clearing doubts in the minds of reasonable Ghanaians over who actually President Akufo Addo is with pictures and videos.

Date for this mega interview is 29th March 2022

It’s a Tuesday and broadcast will be live on Loud Silence Tv on Multi Tv Platform and all our digital platforms including our many affiliates platforms on social media.

On Facebook our pages are Loud Silence Tv and With All Due Respect.