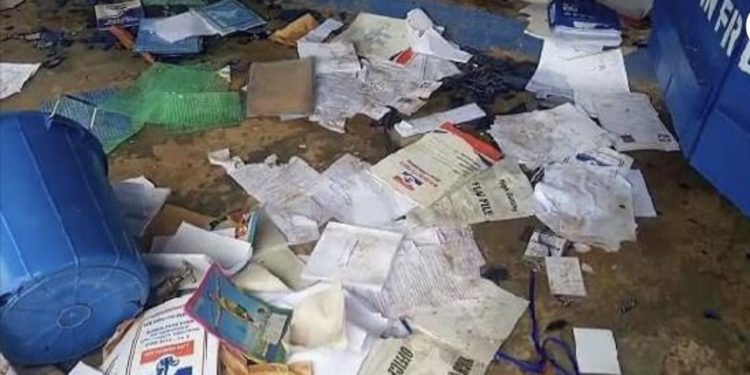 23
SHARES
127
VIEWS
Share on FacebookShare on TwitterShare on WhatsApp

Some members of the New Patriotic Party in the Suaman constituency went on rampage vandalizing the party’s office at Dadieso over the failure of assembly members to endorse the president’s district chief executive nominee.

The assembly members on Thursday, September 30, failed to endorse the nomination of Mr Philip Kwabena Boahen as more than half voted against him.

According to a report by Adomonline, the Electoral Commission Officer, Joseph Amapadu, declaring the results, stated that the commission cannot conduct any election until President Akufo-Addo presents another nominee.

This development is said to have evoked the anger of some youth who vandalized the party’s office.

The irate party faithful, including a communication officer, are reported to have forced their way through the doors of the office, flanged the door open and tossed documents and other party paraphernalia about.

The group also completely vandalized a refrigerator and air-conditioner in the office.

However, the party’s leadership is yet to comment on the development.

Meanwhile, the Kontihene of Suame traditional area, Nana Kofi Armah II, has expressed disappointment over the failure of the assembly members to confirm the DCE nominee.