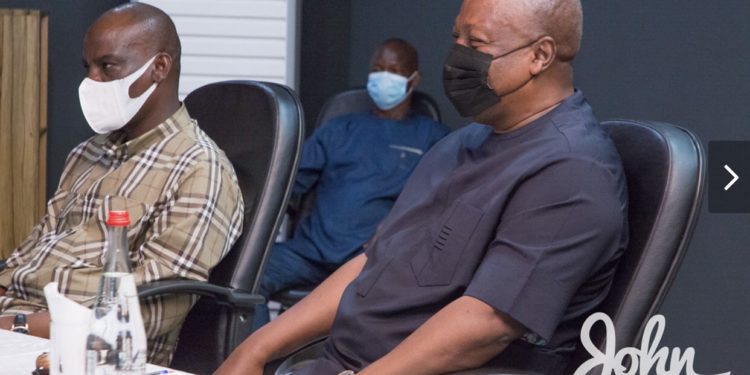 114
SHARES
635
VIEWS
Share on FacebookShare on TwitterShare on WhatsApp

Former President John Mahama has said the leadership of the minority in parliament has a duty of protecting the interest of Ghana and the party which helped in sending them to parliament.

This was made known in a post the former President shared on Facebook thanking leadership of the NDC in Parliament for their resilience in making sure they stopped all imposing of nuisance taxes on Ghanaians by Akufo Addo and Bawumia who has terribly mismanaged the Economy.

In his post Mr Mahama who contested on the ticket of the NDC in the 2020 elections said government cannot be imposing taxes on Ghanaians and be wasting away money on things which does not benefit the country collectively.

This is coming at a time the whole country seem to have wholeheartedly rejected the e-levy which government is bent on passing.

Below is what Former President Mahama said in full.

I joined our Members of Parliament for the closing session of their 2022 Caucus Retreat on Monday.

It was a good session as they prepare to resume sittings, and after a year in which they demonstrated their commitment to pushing the desires and interests of their constituents and Ghanaians generally in the House.

Our MPs and the leadership have done very well in holding government accountable and on behalf of the general membership of the National Democratic Congress (NDC), I expressed our appreciation to them.

It is important for MPs, as stressed by other speakers and the leadership, to always remember that they are representing the people and are also in the House to represent the NDC.

The NDC remains opposed to the imposition of the numerous fresh taxes on Ghanaians at a time when Government is living large and unwilling or unable to trim expenditure, cut waste and check corruption.

These burdensome taxes will erode business capital, especially at a time when Government has crowded out the private sector’s access to credit by its voracious appetite for borrowing.

The Ghanaian economy has been collapsed by President Nana Akufo-Addo and Dr. Mahamadu Bawumia.

The debt crisis, for which there are very few tangible projects to show for, and worsening economic hardship of Ghanaians amply demonstrate the negative impact of a collapsed economy.