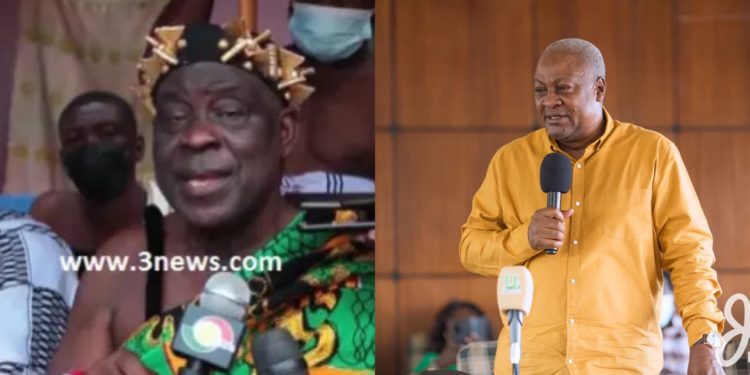 188
SHARES
1k
VIEWS
Share on FacebookShare on TwitterShare on WhatsApp

The Chief of Mfrante in the Ejura-Sekyedumase Municipality of the Ashanti Region has thrown his support behind former president John Mahama over his ‘Do or die’ comments, which sought to charge his party’s agents to be extremely vigilant at the next polls.

Nana Sekyere Bobo III says he sees nothing wrong with the statement made by the 2020 Presidential Candidate of the National Democratic Congress (NDC) last week.

He expressed these sentiments on Sunday, September 12 when the former president called on him at the start of his two-day tour of the Ashanti Region as part of his nationwide Thank You tour.

“It is just disheartening that the former president has been misconstrued in asking his own supporters to be vigilant at the polls in 2024,” he said in Twi.

“He only said whoever is given any task should be diligent in discharging it and making sure it is succesfully completed. There is nothing wrong with what he said.”

He asked the former president not to be discouraged by the reaction the statement has generated because he foresees good times for him.

Nana Sekyere Bobo III attributed the spin on the ‘Do or die’ statement to detractors who only imputes negativity to whatever the three-time NDC leader says or does.

“I am very happy he has ruled out Supreme Court and charged his people to be vigilant so that thieves do not steal the results,” the Mfrante chief added.

Former President Mahama visited the Mfrante community to also commiserate with families of NDC supporters who were involved in an accident during the 2020 campaign trail.