Those Asking for the Country to be fixed are first Ghanaians, Listen to them and Fix the Country- Mahama to Akufo Addo 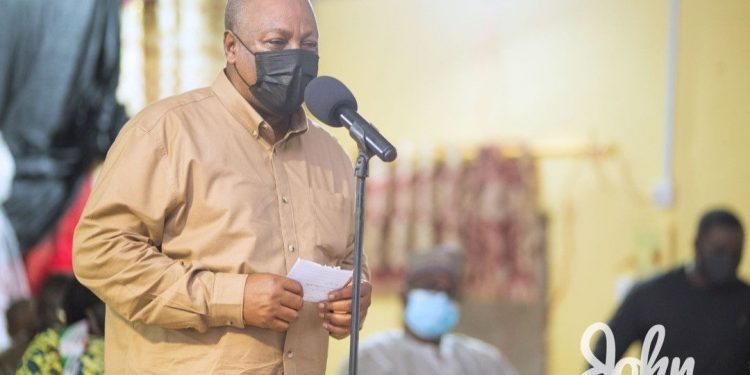 28
SHARES
153
VIEWS
Share on FacebookShare on TwitterShare on WhatsApp

The former President, John Dramani Mahama, is asking the government to prioritize the demands of the #FixTheCountry movement.

Mr. Mahama insists that the demands of the group are legitimate and cannot be downplayed.

Mr. Mahama made the remark when he spoke at the NDC Professionals Forum at the Cedi Conference Centre of the University of Ghana on Monday, September 6, 2021.

According to him, instead of ascribing political motives to their demands, the government should rather consider the genuine cry for help from the young citizens and the entire population.

“The speed with which hundreds of thousands of young people spontaneously took over social media and demanded that this country be fixed is a cautionary tale on how exactly the people feel about the way this county is being governed.”

“Rather than cynically scoffing at these calls, ascribing political motives to them, and pretending that the genuine cry for help from our citizens is the figment of the imagination of some political leaders, we should be lending a listening ear to these young people and indeed the general population.”

About Fix The Country Group

The protest was to press on the government to address Ghana’s numerous challenges, including youth unemployment, poor infrastructure, and high cost of living.

Clad in red-head and armbands, the protesters held placards with inscriptions some of which read, ‘A nation without patriotism is a dead nation’,  We aim for waakye, they aim for V8s’, ‘Fix the Country, ‘A new Constitution for the People’, among others.

A few months ago, the campaign started on social media, with a lot of Ghanaians jumping on the trend.

According to the conveners of the campaign, the demonstration is just the first of many to happen in the coming weeks.

John Mahama tours the middle belt of the country