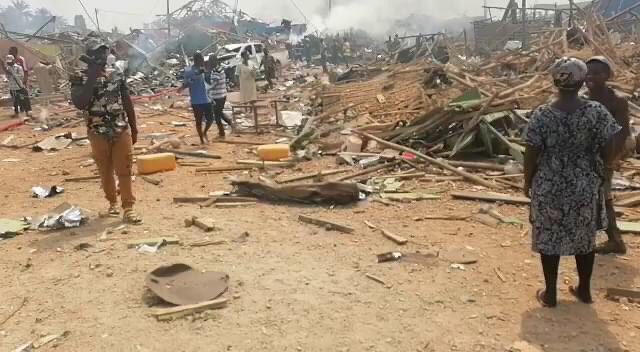 223
SHARES
1.2k
VIEWS
Share on FacebookShare on TwitterShare on WhatsApp

The Ghana Police Service and other emergency service providers have activated a full emergency recovery exercise after a huge explosion on Thursday afternoon (January 20, 2022) at Apiate between Bogoso and Bawdie in the Western Region.

The cause of the explosion was not immediately disclosed by the Police.

“We urge all to remain calm as we manage this unfortunate situation,” the Police said in a statement.

Narrative of what might have led to the explosive remains sketchy.

But multiple report suggest there was a collision between a truck carrying gas cylinders and a motorcycle while others says it’s possible the truck was rather with dynamite.

It’s a developing story and we will keep you updated.

While at it, some videos from the scene captured below.