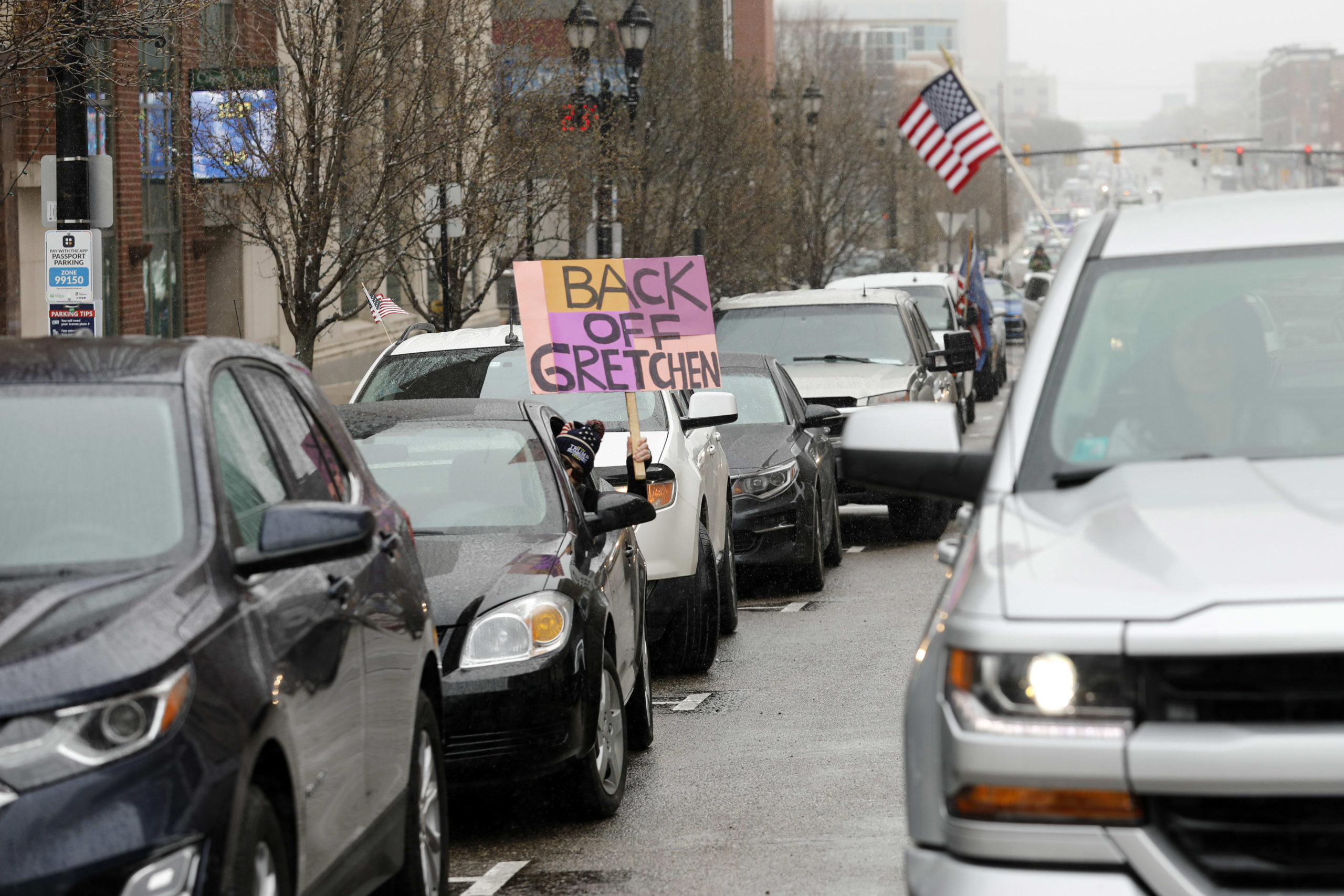 A protest organized by “Michiganders Against Excessive Quarantine” gathers people to drive around the Michigan State Capitol in Lansing, Michigan on April 15, 2020.

President Donald Trump on Friday urged Michigan, Minnesota and Virginia to “LIBERATE,” compounding the pressure on state leaders to start loosening their strict social distancing measures amid the coronavirus pandemic.

The president’s exhortations on Twitter came a day after the White House issued new federal guidelines on “reopening” the economy, providing states and regions with a broad pathway toward easing their restrictions on businesses and individual residents.

The tweets — which marked Trump’s most aggressive calls yet for state economies to reopen — also echoed an increasing number of protests around the country, led mainly by his supporters, demanding governors change their social distancing rules. The three states Trump targeted have Democratic governors.

“There are safe ways that we should all be able to go outside and enjoy ourselves a little bit,” said Meshawn Maddock, an activist with the Michigan Conservative Coalition, which organized a massive protest in Lansing, Michigan, on Wednesday.

“There’s also safe businesses that should be able to open up, using practices of social distancing and hygiene, and get back to work because right now Michigan is decimated,” Maddock told CNBC in a phone interview. “I mean, we’re at a standstill, and I’m actually terrified for our economy.”

Michigan has the fourth-highest number of confirmed Covid-19 cases in the U.S., according to data from Johns Hopkins University. More than 29,000 people in Michigan have been infected and more than 2,000 people have died.

Health experts, business leaders and politicians have warned Trump that coronavirus testing in the U.S. needs to be much more widespread before Americans can safely start returning to their normal lives.

Roughly 1% of the U.S. population has been tested for the coronavirus so far, with only about 120,000 tests performed each day, according to the Centers for Disease Control and Prevention. But experts say that millions of people will have to be tested each day, even as many as 20 million to 30 million people, before the nation can return to a semblance of economic normality.

Lifting social distancing restrictions too soon could lead to another surge in infections, prolonging and deepening the impact of the virus, experts say.

Even the White House guidelines for an economic reopening say that states or regions should have a “robust testing program in place for at-risk healthcare workers, including emerging antibody testing,” prior to starting the first “phase” of the plan.

State leaders such as Gov. Andrew Cuomo of New York, which is the epicenter of the crisis in the U.S., have called on the federal government to help their testing efforts. But Trump tweeted later Friday that “the States have to step up their TESTING!” and attacked Cuomo directly.

“Your numbers are not good. Less talk and more action!” Trump tweeted.

Recent polls show Americans overwhelmingly support keeping up the social distancing measures, such as ordering residents to stay at home and closing nonessential businesses. Democrats are more likely than Republicans to support the measures, which have devastated the U.S. economy and led to an unprecedented unemployment spike, although majorities of both parties support the measures.

Still, protests against the rules have popped up in at least half a dozen states, including Michigan, Minnesota and Virginia, and local reports say more could soon be coming elsewhere, including in Pennsylvania and New Jersey.

“I think they’re listening. I think they listen to me. They seem to be protesters that like me and respect this opinion,” Trump said of the protesters in Michigan during a White House press briefing Thursday.

The Lansing rally outside the state’s Capitol building, dubbed “Operation Gridlock,” drew thousands, most of whom demonstrated from inside their cars — but some gathered in person, defying the social distancing rules.

Protesters waved pro-Trump flags and signs from sidewalks, while others hung messages from their vehicles supporting the president and decrying Democratic Gov. Gretchen Whitmer’s rules, which they say infringe on their civil liberties.

“This actually looks like a Trump rally,” a man at the protest said on one livestreamed video feed of the event.

Maddock complained that media reports of the protest focused too much on “a couple of yahoos that stood on the Capitol steps shoulder to shoulder and took pictures with guns.”

“That’s not what this protest was,” she said.

People take part in a protest for “Michiganders Against Excessive Quarantine” at the Michigan State Capitol in Lansing, Michigan on April 15, 2020. –

Whitmer’s latest orders aimed at slowing the spread of the coronavirus are among the strictest in the country. The new rules tighten business restrictions and prohibit some activities, such as using motor boats.

“I know that there are a lot of businesses and people that are hurting right now, but the fact of the matter is it’s better to be six feet apart right now than six feet under,” Whitmer said Friday on ABC News’ “Good Morning America.”

At a briefing in late March, Trump said he instructed Vice President Mike Pence, who leads the U.S. response to the coronavirus, not to call governors who aren’t “appreciative” of his efforts.

“Don’t call the woman in Michigan. It doesn’t make any difference what happens,” Trump said he told Pence.

The president’s criticism and Whitmer’s status as a potential figure in the 2020 election “probably” helped to stoke partisanship in Michigan, said Matt Grossmann, director of the Institute for Public Policy and Social Research at Michigan State University.

“There’s a fairly long-term pattern of partisans on each side being mobilized by their president and changing their ideas based on what the president says, and that’s been amplified in the Trump era,” Grossmann said.

That could also be the case in Pennsylvania, where local reports say a mass gathering is being organized for next week in front of the state Capitol building in Harrisburg.

“I think this has a lot more to do with the psyche of folks,” said Ray Zaborney, a Republican political strategist based in Pennsylvania.

“I think everyone is willing to do what is needed to be done,” but some leaders “haven’t communicated it well.”

Trump’s more optimistic message, that an economic “boom” will arrive once the pandemic blows over, resonates with more Americans, Zaborney said.

“No one’s prioritizing reopening except the president,” Zaborney said.

Pennsylvania and Michigan have been pummeled especially hard by the virus and the containment measures clamping down their economies.

The two battleground states posted some of the highest jobless claims in the nation over the past four weeks of Labor Department releases.

If Trump continues to press for economic relief while governors keep their draconian measures in place, Zaborney said he expects protests to spread throughout the country.

“As people get more frustrated, it could get more intense,” he said.

Cancer Patients Report Delays in Treatment Because of COVID-19