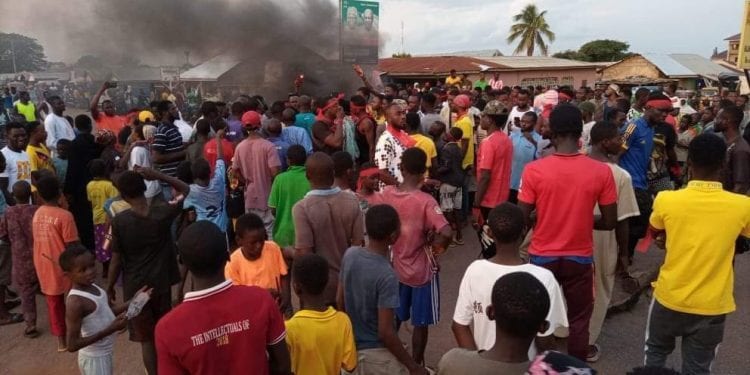 66
SHARES
368
VIEWS
Share on FacebookShare on TwitterShare on WhatsApp

Two persons are feared dead while nine others have been injured after some residents of Ejura in the Ashanti Region clashed with a joint team of police and soldiers on Tuesday, June 29, 2021.

The clash occurred when some residents pelted stones at the security personnel who were deployed around the burial grounds of the late social activist, Ibrahim Muhammed.

According to the Kontihene of Ejura, who visited the affected persons at the Ejura Government Hospital, two persons have been confirmed dead, while nine persons are critically injured.

“They went overboard and started throwing stones and pebbles at the security vans and they [the security personnel] also returned fire,” the Kontihene said.

Some persons sustained gunshot wounds after the police fired shots to disperse the crowd.

The Kontihene further urged residents to remain calm amidst their appeals for justice.

“All that I am telling my people is that we are not fighting the security agencies. We want justice for the dead,” he said.

Ibrahim Muhammed died after he was attacked by a mob when he was returning home on his motorbike on Sunday.

He was rushed to the Ejura Government Hospital and later referred to the Komfo Anokye Teaching Hospital, where he died at midday on Monday.

Police in the Ashanti Region have since arrested two persons in connection with his death.